Building robots that sense and interact with their environment used to be tricky. Now, Arduino makes it easy. With this book and an Arduino microcontroller and software creation environment, you’ll learn how to build and program a robot that can roam around, sense its environment, and perform a wide variety of tasks. All you to get started with the fun projects is a little programming experience and a keen interest in electronics.

Make a robot that obeys your every command—or runs on its own.

Maybe you’re a teacher who wants to show students how to build devices that can move, sense, respond, and interact with the physical world. Or perhaps you’re a hobbyist looking for a robot companion to make your world a little more futuristic. With Make an Arduino Controlled Robot, you’ll learn how to build and customize smart robots on wheels. 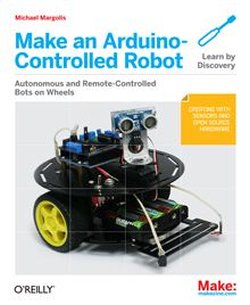 Chapter 5 Tutorial: Getting Started with Arduino

Chapter 9 Modifying the Robot to React to Edges and Lines

Appendix Using Other Hardware with Your Robot