I’ve been slowly working on this project for the past month or so. I finally have some time to share and post-up what I’m working on.
I know there are commercial products available, but then what’s the fun in that!
What I want is a Fully Automated LED Primary Lighting System which can control separate white and blue high-powered LED modules on my 45gal bow-front tank. What I mean by fully automatic is that I’d like an intelligent light controller which uses user-defined pre-set schedules to slowly ramp the lights on and off accordingly. 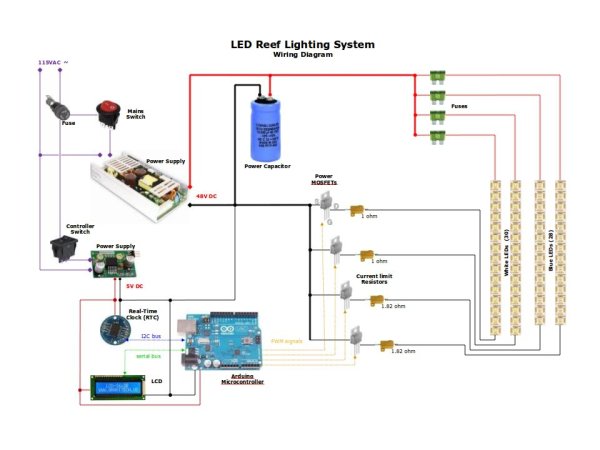 For the high-power LED arrays, I settled on Luxeon Rebels, a switching 48V DC power supply, and typical current protection resistors. I know many applications are using very efficient buck/puck drivers to power LEDs but that won’t work for this project since I will be doing my own PWM (pulse width modulation) to control LED intensity. Some buck drivers do allow for a dimming input, but this is not the route I’m taking. I designed these LED arrays as to minimise the current limiting resistor as much as possible.
For the logic or controller portion, I went with the open source Arduino micro-controller platform. Arduinos are so cool and easy to program with simple C++ like language and USB right to your PC. This allows me to write software (aka firmware) which tracks time of day and the user-defined lighting schedules. Then the controller runs on it’s own.
Here’s a detailed look at the logic section:

The controller simply sneds TTL logic levels to the four MOSFET’s which effectively blink the LED arrays on/off at various duty-cycles. It’s so fast that the human eye (or fish’s eye) sees a dim LED. This is known as PWM and is the industry standard way to dim LED lights. 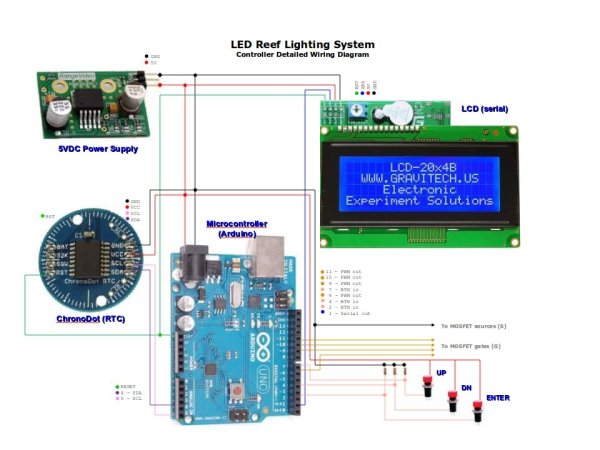 With this controller I am able to dim all four LED arrays independently over 255 different dim levels from fully-on to fully-off. When you have this amount of granular control over two white and two blue light modules, it doesn’t take long for the coolness factor to set in! And to really blow your mind, the Arduino platforms expands into Ethernet and wireless accessories. I can envision this project one day leading to a graphical web-interface where I’d be able to virtually drag/drop lighting profiles at the click of a mouse!

In short: I developed a portable, battery powered device that sounds an alarm when your bag or purse is moved....