Since now on, it will be easy to provide your Arduino with Internet connectivity by using this shield. The shield sports a TCP/IP stack manager, in order to free up the Arduino from some basic tasks. It’s also essential to equip the board with a library, that communicates with the TCP/IP manager and makes it easier to program the Arduino and to let  it communicate with other computers via the Internet. 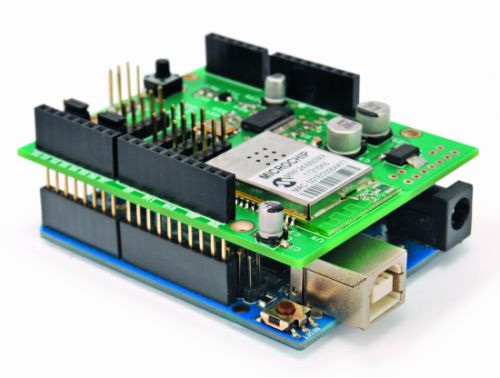 Despite the proliferation of hardware to connect Arduino with the web, and especially despite YUN, we considered useful to design and propose a new WiFi shield for Arduino, which replaces the one already presented.


This time we indeed added an interface processor  that manages the TCP/IP protocol: a definitely too challenging task for Arduino. Anyway a network interface card becomes really useful if it’s driven by software which simplifies as much as possible its use, especially in a context of reduced hardware resources such as with Arduino. For this reason we supplied the card with a Arduino library, that is easier than that for more complex hardware such as that of YUN.

The hardware is essentially based on a radio element (MRF24WB0MA) and a MCW1001A processor by Microchip. The power supply is 3.3V (using a voltage regulator from the 5V of Arduino) but the processor also bears TTL levels. The radio element has also an antenna wired on its base. The processor is connected to the radio element via SPI lines (SDO, SDI, SCK) and other control lines such as CS, INT, RST, HIBERNATE, WP.

READ  How to Build a Class-D Power Amp

The board is then connected to the host (Arduino) with a two-wires serial interface in TTL logic (RX, TX). This forced us to use a software simulated serial port with a customized version of the SoftwareSerial library. The customization was necessary because of the two stop bits mode, but also to adjust the optimum speed and make the use of the library transparent. In fact, this version of the SoftwareSerial is included in the library. But this mode of connection precludes the possibility of using the standard SoftwareSerial library for other uses in the same sketch.

For more detail: A new Wi-Fi Shield to connect your Arduino to the Internet

I've been slowly working on this project for the past month or so. I finally have some time to share...