This post is about an interesting, low-cost sensor that doesn’t need much processing to use, and has some unique characteristics – a PVDF (polyvinylidene difluoride) Piezoelectric sensor. The sensors looks like a small strip of plastic, and can be used for detecting movement or vibrations even into ultrasound. Such devices can help sense in many practical, real-world scenarios. They are extremely sensitive, low cost and easy to use.

Some simple practical experiments with these sensors are described, finally looking at detecting ultrasound. 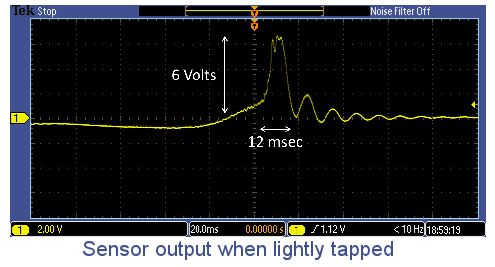 Sensors will play a big role in IoE helping to identify what is happening in the real world. I was keen to try out PVDF sensors because I think they could have a lot of applications. For example, they could be used to identify when home appliances are in use (due to vibrations), such as a washing machine, or as movement detectors (sensing people walking on a floor) or glass breaking.

There is a general overview on Wikipedia, but in summary PVDF (also known as PVF2) is a plastic that, when suitably manufactured (it is stretched, heated and an electric field applied during manufacture), becomes a piezoelectric material, meaning that it can generate a charge when some force is applied to it. It appears that stretching orientates the molecules into a common direction, and the electric field (at a temperature close to melting point) further aligns the molecules from an electrical orientation standpoint.

The PVDF sensor available from Farnell / Newark is a small sheet of the material with a layer of metal on each side and two crimped contacts (PVDF has a low melting point so be quick with the soldering iron). It is about the size of a small stamp.

There is a wealth of information for PVDF sensors here (in particular the Piezo Technical Manual on that page). It shows that PVDF has many applications including switches, impact, vibration and ultrasound.

According to what I’d read, the voltage output from such sensors was quite high. The first step was to connect it up to the oscilloscope and see if this was the case, and if anything was measurable. It turns out the answer was Yes!

Here is the output when the sensor was lightly flicked – the amplitude was 6V.

This level of output could be interfaced to a microcontroller with no amplification needed, but some protection would be needed (either clamp with diodes, or (as shown in the technical document) limit the current with a series resistor).

This was the output when gently blowing on the sensor from a few centimetres:

More tinkering with the wonderful Adafruit 2.8″ Touchscreen TFT module (PiTFT) for the Raspberry Pi.  This time a weather station...