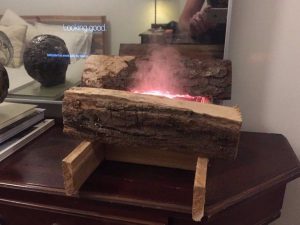 This is a project I’ve had on the backburner for almost exactly 1 calendar year. The seed was planted when I toured the Harry Potter Studios last year and saw a fake fireplace effect being used quite extensively.

I am also an avid watcher of the “Fireplace for your Home” Netflix channel, so I eventually realized I needed one of these imitation fires of my own. So here we are now!


Take a look at what I put together, and if that curiosity is still burning keep reading for instructions to reproduce this project yourself.

The instructions for this are actually pretty simple, basically you just need to get the materials, and put them all together. The only technical part is soldering the wires onto the NeoPixel stick, and uploading the code to the Arduino. So let’s start with the NeoPixel LEDs.

Step 1: Get the LEDs Working

Start by downloading and installing the NeoPixel Arduino Library found here. Prepare your NeoPixel stick to plug into the Arduino by soldering wires to the GND, DIN, and VIN leads located at the bottom of the stick.

Now plug GND into the GND pin on your Arduino, VIN into the 5V pin, and DIN to Pin 6 on the Arduino. If you run the example sketches included in the NeoPixel library, you should the lights working as expect.

Now you can upload the fire specific code I wrote found here. If you’ve plugged the NeoPixel into Pin 6, GND, and +5V, you should now get some bright orange lights.

Makers developers and small businesses may be interested in a new Wi-Fi enabled e-paper display that will soon be launching...