Hi there! As I’ve almost finished my studies at Faculty of Engineering, I had to make a graduation project and my thought was to make a jaw-dropping thing (I know that’s hilarious 😀 ) to show everybody that I’m a good prototype maker and I can turn ideas into real and useful things.

I know GSM controlled home automation systems are widely used and can be found easily on internet, but as we all know, the prices are very prohibitive for general consumers. This is why I’ve tried to build some sort of device based on open-source knowledge that can be replicate by all the hobbyists, even if they are amateurs or professionals. 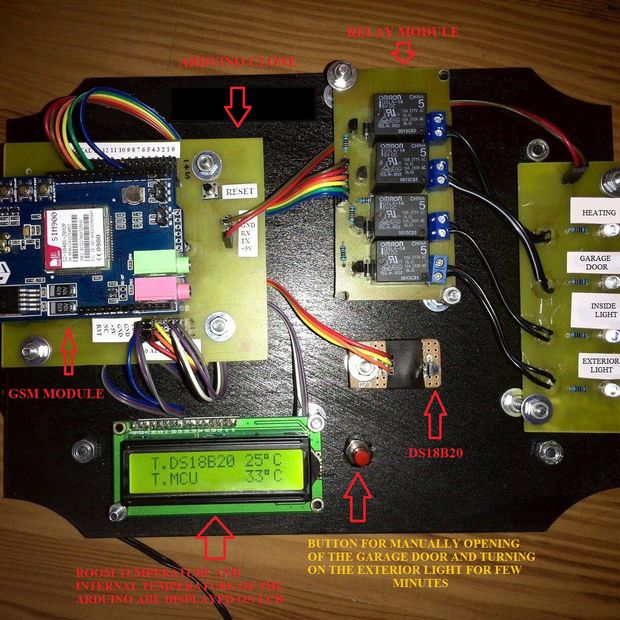 So I begun to think what kind of basic home appliances could be remote controlled via GSM network and nothing else? We all know, that you can control lights, heating, multimedia system and so on, but I’ve tried to make my project closer for my basic needs: lighting and heating (optional – garage doors, but it’s not my case because I live on a 3rd floor apartment).

I mention that the finished prototype, seen in the photo, can be used safely (with a bit of tweaks, of course) on any kind of building with or without garage (the garage door relay can be repurposed for any other activity)

For this project I’ve used:

1. An Arduino clone
2. SIM900 GSM SHIELD
3. Relay module
4. 2×16 LCD Display
5. DS18B20 temperature sensor
6. Push button
7. Some Dupont wires
8. A led module (this is optional, if you have a chinese relay module with built in LEDs)
9. Some nuts and bolts to mount everything in place
10. A wooden chopping board or other kind of wooden board for propper display of the components

The costs?… The gsm shield was about 40$ from eBay, LCD…2$, DS18B20…1.5$, Dupont wires another 2 bucks, push button…few cents, the relay module 2-3$ to make and the Arduino clone was less than 10bucks to make…
Conclusion: you can build your own basic GSM home automation with less than 100$!

If you like this instructable please feel free to vote it on each contest it is subscribed! Thanks! 🙂

For this project I wanted to make a stand-alone Arduino board because I only have one Arduino UNO and I’m using it for my random project, so the need for a clone board was huge. I’ve managed to modify a schematic provided by my good friend Nicu Florica, which is derived from Nanino project and for my application I’ve added few pins to facilitate the connection of other devices (sensors, relays, etc) when a shield is attached on the main mother connectors. 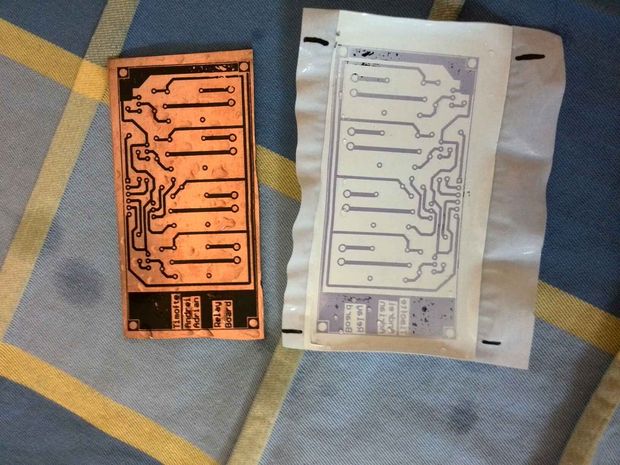 The method used to make the PCB is just p’n’p using Oracal 641 paper, an 8 years old HP LaserJet 1018 printer, a clothes iron, ferric chloride etchant, some kind of dissolvent to clean out the toner traces after etching process and obviously a copper-covered board ready to be turned into a PCB.

After etching and cleaning the finished PCB, I’ve drilled all the holes for components and connectors, I’ve soldered them all, I’ve checked for short circuits and the result can be seen on the last photo.

Because I don’t think that the etching and soldering processes are important, I’ve only made few pictures of the critical parts of the building.

Don't worry! First, this is a rebuild out of a movie so it won't explode for real and it won't...