Get ready for MPLAB Express

I credit the maker movement with bringing electronics back from the crusty old and lonely electronics hobby back into the main stream. The Arduino is the micro of choice for this army of makers and I conceded it made sense… you install the IDE, plugged in your board into the USB port and a couple clicks later and you have an LED blinking.. the most exciting blinking LED you’d ever seen in most cases. I stuck with the PIC micros because I didn’t see any need to put back on the training wheels. 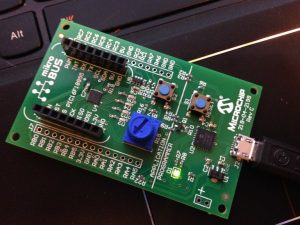 I got invited to a conference call earlier this week as they rolled out MPLAB Express. I almost passed the email up as spam, I’m glad I didn’t… a quick half hour later and I was in shock. Microchip is now relevant in the hobbyist realm.. They just leapfrogged over Arduino in usability for the beginner. They just released Microchip MPLAB Express a new, free, online cloud-IDE. Write your code (or pick a sample), press the compile button and the .hex file downloads.. DRAG AND DROP the .hex file on to the dev board. … the dev board looks like a plain flash drive… just drag and drop and the code is automatically programmed to the device… DRAG AND DROP.. brilliant.

I received my board today, they’re not in production quite yet but will be shortly. The board has a small programmer on board, removing your need for a PICKit programmer. The programmer is a 18LF15K50 … the onboard application device is a brand new 16F18855. The board comes with a break out of all pins and the MikroBUS standard for modules. Mikroelektronika has a ton of little add-on boards and you can certainly make your own. I suspect this board will cost about 15$ or so.. ? We will have to see when they come out.

The online application allows you to bypass the need for MPLAB IDE and XC8 compiler installations on your local PC in trade for using a web brower on your favorite device. They mentioned it works on most common browser platforms on Windows, Mac, and Linux. They said it even works on android and iOS, … I’ll check it out on the android later.

I logged on before the webex to check out the environment found at http://mplabexpress.microchip.com and was initially concerned they missed the boat by not including MCC. Well it turns out MCC is available when you create a free account and logon. (Phew! Near miss Microchip!) MCC is kind of like a cheat-sheet app for settings like micro clock frequency, output setup, etc..

What I like: They’ll give you a comparison of premium optimization next to the standard free compiled version (XC8)! They also will allow you to use the premium optimization by subscription that is easy to start/stop. The price is $30/month… so if you just happened to need to squeeze your code into something you can pick up the premium optimization for a month and take it easy on Starbucks for the week and you’re a wash. I also really like that MCC is online and the programming is drag and drop on the dev board..

Monolithic linear battery charger operates from inputs up to 60V