The GI SP0256 chip is an early 1980s bit of technology. It’s a 5V (to 7V) NMOS chip which is compatible enough with the 5V TTL circuity common in that era. 5V TTL disappeared for a while, then came back with the Atmel _28-based Arduino boards, many of which run at 5V.

The SP0256 chip contains a [crude] electronic model of the human voicebox, and the -AL2 variant comes with 59 English language phonemes built into it. In theory that ought to be sufficient, though in practice perhaps a few more (like an EEEEE sound like in “E.T. the extra-terrestrial”) seem to be needed. Anyway the manufacturer isn’t going to update this part . 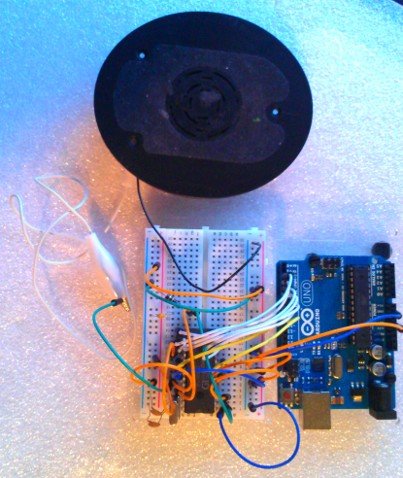 When looking through a box of parts I came across this big chip I vaguely remembered buying as a teenager after reading an article in some 8-bit Atari centric home computing magazine. Maybe this was the article Cheep Talk – Build Your Own Speech Synthesizer in the April 1985 issue of Analog Computing, or this article Talking Typewriter in the January 1987 issue of Antic Magazine, or maybe a handout from Radio Shack. I think I built the circuit and played around with it because the chip’s sound was familiar. Anyway now, in 2014, the chip was there, alone, stuck into the far end of a breadboard for safekeeping.

With the help of the internet for the SP0256 Datasheet and example circuit diagrams and an arduino to drive it it was time for the ole chip to talk again.

There isn’t anything very complicated about using the SP0256. In fact the circuit is tolerant of a lot of Muntzing. 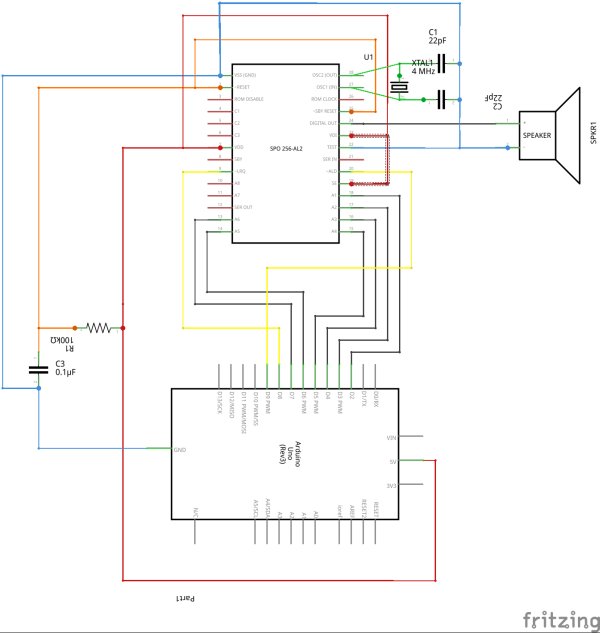