Researchers at Stanford University have created a fast-charging and long-lasting rechargeable battery that is inexpensive to produce, and which they claim could replace many of the lithium-ion and alkaline batteries powering our gadgets today. The prototype aluminum-ion battery is also safer, not bursting into flames as some of its lithium-ion brethren are wont to do.

The prototype battery features an anode made of aluminum, a cathode of graphite and an ionic liquid electrolyte, all packed within a flexible, polymer-coated pouch. And unlike lithium-ion batteries, which can short circuit and explode or catch fire when punctured, the aluminum-ion battery will actually continue working for a short while before not bursting into flames. 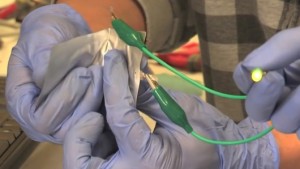 Improved safety is great, but what many people want is a reduction in recharge times. The aluminum-ion battery hits the target here, too, with the Stanford team claiming “unprecedented charging times” of just one minute for recharging the prototype battery.

What about durability? The aluminum-ion battery has you covered there, too. Unlike typical lithium-ion batteries that last around 1,000 charge-discharge cycles, or other aluminum-ion battery lab attempts that usually died after just 100 cycles, the Stanford researchers claim their battery stood up to 7,500 cycles without a loss of capacity. This would make it attractive for storing renewable energy on the electrical grid.

“The grid needs a battery with a long cycle life that can rapidly store and release energy,” team member Hongjie Dai explains. “Our latest unpublished data suggest that an aluminum battery can be recharged tens of thousands of times. It’s hard to imagine building a huge lithium-ion battery for grid storage.”

The experimental battery also has the added advantage of flexibility, which gives the technology the potential to find applications in the burgeoning field of flexible electronics.