Measurements from the real world often contain noise. Loosely speaking, noise is just the part of the signal you didn’t want. Maybe it comes from electrical noise: the random variations you see when calling analogRead on a sensor that should be stable. Noise also arises from real effects on the sensor. Vibration from the engine adds noise if you’re measuring the acceleration of a go-kart, for example. Filtering is a method to remove some of the unwanted signal to leave a smoother result. 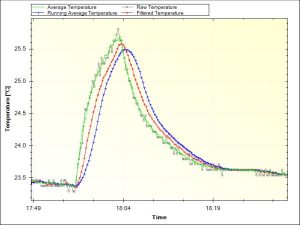 MegunoLink’s Time Plot Visualizer will be used to show both the raw, unfiltered, data and the output from the filter. Comparing the raw and filtered on a single plot lets us easily see the effect of the filter. The filters will smooth the data but they can also introduce a lag.

After applying the various filters, the data was sent to MegunoLink for plotting:

The three filtering algorithms we are going to look at are:

The screenshot from MegunoLink below shows these algorithms together. A small rise in temperature was created by touching the thermistor to see how the different filters would respond. The grey line is the raw temperature measurement. It is pretty good with not much noise. But there is still room for improvement.

Admit it: At some point in your life, you've likely imagined how much easier it would be to have a...