Simple LED matrix Clock based on the popular ESP8266 with Real Time Clock module and time synchronization over WiFi from an NTP server. 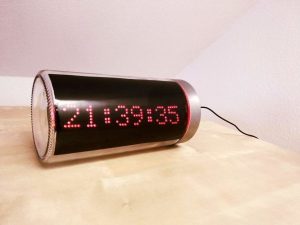 First let’s see what we need.

All the parts can easily be sourced from ebay/aliexpress and/or local stores.

I found it easier to buy 2 x 4pcs modules, cut one of them in half and solder it to the other one while maintaining the orientation printed on the PCB.

Step 3: Connect the LED Matrix Display and the RTC to the ESP8266

Solder the pin headers on the modules then use the dupont cables to connect them as follows.

One note on the RTC module, apparently it also has the ability to charge the battery, however that’s not a good idea when using a CR2032. One possible solution would be to cut the trace marked on the image in order to disable the charging part of the circuit. Further information on this can be found here.

Nest step would be to upload the code to the ESP8266.

While the original code can be found here (many thanks to the author !) you can find attached the English version of it.

The upload process is pretty straight forward, just don’t forget to update the code with your WiFi credentials.

Step 5: Apply the Solar Film on the Pasta Jar

I’ve decided to only cover one part of the jar with film to keep the rest of components visible.

After some trial and error I’ve noticed that the ‘secret’ is to have both the jar and the film as wet as possible with soapy water to be able to make adjustments as you apply it. Use the spray bottle to keep everything nice and wet and the hobby knife to cut the excess film.

Once it completely dries the film should be pretty well stretched on the jar.

We’ve all been there. A big bag of resistors all mixed up. Maybe you bought them cheap. Maybe your neatly...