I recently bought a 500ppm LCR meter from Elektor because I didn’t have anything for measuring inductors or the ESR (equivalent series resistance) of capacitors, both of which are important for modern electronics, particularly switch mode regulators that have become ubiquitous. 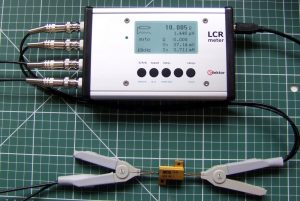 It is also more accurate than any of my multimeters and has wider measurement ranges. For example it can measure resistance from 0.1mΩ to 1GΩ and capacitance between 0.1pF and 0.1F. This means I can now measure parasitics like contact resistance, stray capacitance and lead inductance. The principal reasons it can do this while my multimeters can’t is because it uses a four wire Kelvin connection to the device under test, and as well as measuring voltage and current, it also measures the phase between them.

It took over a month to be delivered and the case arrived two weeks later. The meter’s arrival coincided with the arrival some ridiculously cheap switch mode buck and boost regulators from China. None of them worked properly (no surprise there) so it was pressed into service straight away, without its case. It worked well but when I got the case there were a few snags assembling it and then it then didn’t work properly.

The case comes pre-drilled and labelled from Elektor and is about three times the price of the generic version available from RS and Farnell. I expected it to include all the fasteners for that price but it only came with the screws that hold the case together.

To mount the LCD PCB I needed four M3 x 16mm countersink screws, nuts and washers and four 7mm M3 spacers. Luckily I already had suitable screws and I used eight 6 BA x 1/8″ spacers as the LCD is actually 6.4mm only thick. If I hadn’t had those I would have printed some custom plastic ones.

READ  3D PRINT YOUR WAY TO A GLASS COCKPIT SIMULATOR

I found the LED was too short to reach the hole for it in the front panel, so I re-soldered it as high as I could to improve its appearance. I also chamfered the back of the hole for it with a countersink to guide it in.

The next issue I had was the ribbon cable was way too long with nowhere to store the excess.

I shortened the cable and re-attached the IDC plug on the other side.

In this project we will use an existing FM radio which went repair a long time ago, to convert it...