Ever electronic device emits a certain amount of electromagnetic fields and we can use this radiation to learn a few things about the circuit. 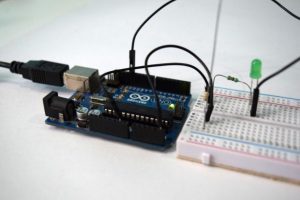 In today’s instructable I’m going to show you how to build your own electromagnetic field meter using an Arduino. This device can be used to detect mains voltage, static electricity and radiations from certain devices. It can also be used to detect ghosts :P.

So lets get started…

This circuit is built on a breadboard and hence no soldering skills are required, the list of materials required are quite simple and easy to find on eBay.

The circuit diagram is really simple and can be found above. The sensitivity of the device can be changed by varying the values of resistance across the 100k Ohm resistor. The higher the value of the resistor, more the sensitivity, if you are going to detect static electricity I recommend using a 1M resistor.

The code for this tutorial can be found below

All the code does is reads the voltages at the analog pin and turns on the led if a certain threshold voltage is reached. So the LED turns on when you bring the device near a mains supply.

After uploading the code it is now time to test the device, for the antenna you could use a 3 inch copper wire. Power on the device make sure you use a battery as the power source to eliminate noise in the signal.

Next, take it towards your mains supply and you should see the LED light up. You could also try this around motors, lights and microwave ovens.

Monitor your plants and let them water themselves when they are thirsty. Story Motivation I work in a rather 'sterile'...