This Arduino project was part of an Association of Mechanical Engineers (ASME) contest to create an Autonomous Material Sorter. The sorter was to sort four glass bottles, four plastic bottles, four Tin cans, and four Aluminum cans. There were requirements such as size of the bottles and size of the machine. The machine had to be able to sort the bottles and cans automatically after being started and had to run off of a dry-cell rechargeable battery. The full machine requirements can be read in the PDF file ‘ASME’.

The problem in the competition was not the machine, it was the hopper.  Most of the time was spent building the machine and little time was devoted to the hopper. The hopper was the part that all 12 bottles/cans were poured into before the machine was turned on. The hopper was supposed to feed 1 bottle/can at a time to the machine. The hopper for this machine was just a slide.  The first bottle/can on the slide would rest on the edge of the conveyor and then the rest would stack up behind it.  When the bottles/cans were poured onto it, the weight of all the bottles/cans collapsed and many fell into the machine at once.  This is where you can hear the crowd let out a big “OOHHHH”.  Nobody was allowed to touch anything once pouring began so there was nothing that could be done except start the machine. 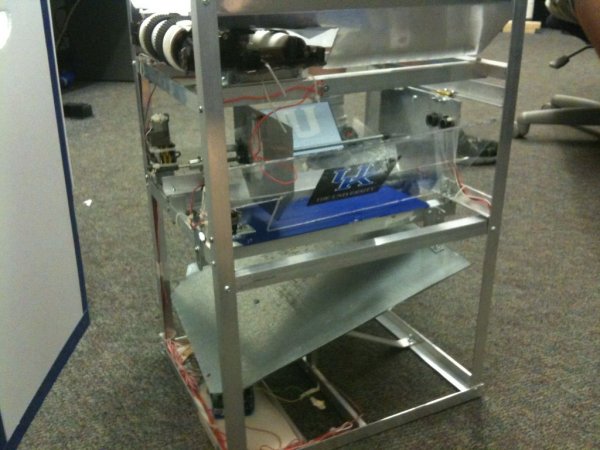 I turned the machine on to see what the machine would do. There were still bottles/cans on the slide at this time so when the conveyor started, it rolled down the conveyor and fell on top of the others that had already fallen into the machine.  It wasn’t Tin so it didn’t pull the magnet up.  Since there were at least 3 or 4 bottles/cans between the plates in the second testing area, it didn’t close the conductivity test, and, since there were bottles/cans stacked up in front of the ultrasonic sensor, the machine thought it was short, so it thought glass. The ramp underneath turned to the glass bin, but when the trap door tried to open, the weight of all the bottles/cans maxed out the motor and it didn’t open far enough to allow the bottles to fall out.

The Arduino was set to leave the trap door open a few seconds to allow the bottle/can to fall out and slide down the ramp and then close back.  The ramp returned to its starting position and then the door closed.  The Arduino started the process over again, and started the conveyor.  This time when the next bottle/can fell off of the conveyor, there were so many bottles/cans between the plates, that motor couldn’t put enough pressure to activate the switch behind the hinged plate so the motor just kept running.  At the end you can hear the motor running when it was decided to shut the machine off.

The machine actually worked like it should have based on the conditions the sensors were given.  The part that failed was the hopper which had nothing to do with the electronics of the machine.  Before the competition the machine was test by placing one bottle/can on the conveyor at a time and everything worked perfectly.

The first step is to find ways to identify each type of bottle and can.

Since the Tin can is the only container that is ferrous, a method to test if a material is magnetic will be developed.

Now that the Tin can now be identified, the Aluminum can is the only remaining material that will conduct electricity. A method to test for conductivity will be developed.

The remaining two materials can be sorted by measuring their lengths. In the contest rules, the size of each bottle/can to be sorted is given. The biggest glass bottle is smaller than the smallest plastic bottle. This leaves a gap between the two materials’ lengths. A method to test the lengths of the bottles will be developed.