ePaper pricetags are becoming popular parts in the hacker community as a cheap way into tinkering with the technology. [Aaron Christophel] got his hands on a 4.4″ model with red, black, and white colors, and set about programming an ESP32 to drive the price tag instead. 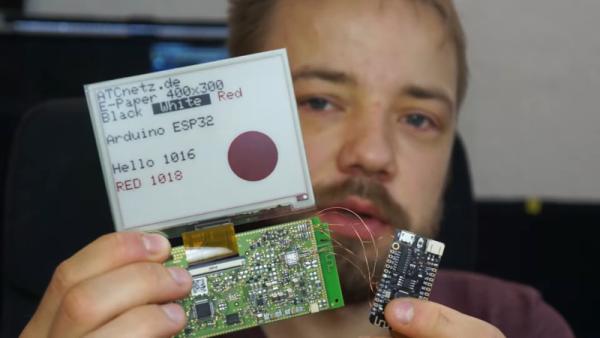 The protocol the display uses was reverse-engineered by prompting the display to update via RF and monitoring the signals sent to between microcontrollers on the display’s control board. Once the protocol was understood, one of the microcontrollers could then be removed and replaced with an ESP32 for direct control. Implementing this takes some disassembly and some delicate soldering, but it’s nothing that should scare off an experienced hacker.

With the right code flashed to the ESP32, as available on Github, it’s possible to run the display directly. The hacked code does a great job driving the display, showing crisp lines and clean colors that indicate the e-Paper display is running properly.

We’ve seen [Aaron’s] work before in this area, when he hacked simpler two-color e-ink price tags. He’s also gone so far as creating entire wall displays out of salvaged displays, which is quite the sight. Video after the break.