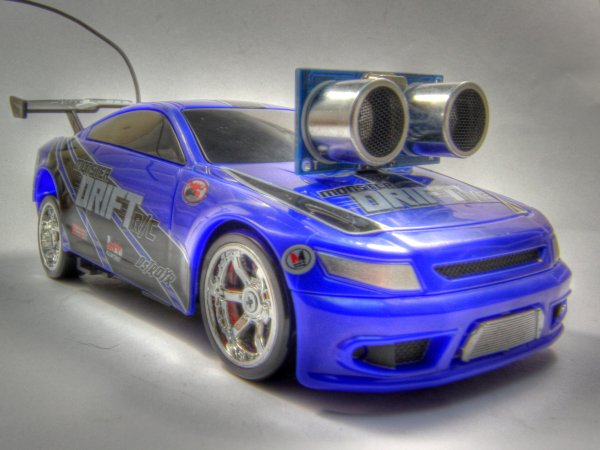 Drifter is based on a cheap RC toy car I found at Toys’r’us, named ‘Fast lane Monster Drift’.  I think it’s the same model Frits has been used in an episode of TLIHR. It doesn’t work well, you get what you pay for. But it is a good hacking platform. There is no much space left for additional electronics, but a Arduino Pro Mini fits very well on the rear axle.

The onboard electronic is as usual very primitive. A PCB with a RC receiver IC, 2 H-Bridges for drive and steering motor, and a voltage regulator (3,3V). Lucky me I found the control signals going from the RC receiver to the motor drivers and an easy way to cut these connectors and put the Arduino between. That way I can use the existing remote control. 4 Inputs and 4 outputs were needed (forward, backward, left and right). As outputs the PWM capable pins 5,6,9,10 has been used to give the possibility of smooth movements, instead full speed drive and steering from the original hardware.

The Remote control is used as a mode selector. On power up the Arduino reads the remote and executes the selected mode of operation. 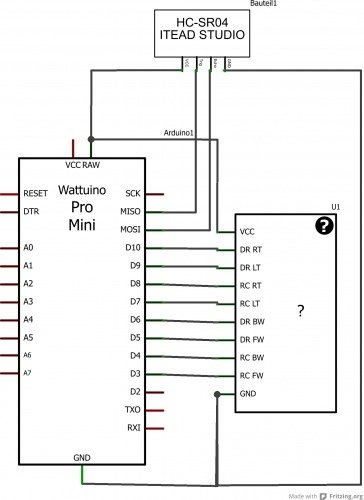 To make the car autonomous it needs a ultrasonic sensor. Unfortunately I only have a HC-SR04 ultrasonic sensor ready, witch is a 5V device. The existing electronics and the Arduino are 3.3V powered. So the HC-SR04 needs to be replaced with a SRF01 or Maxbotix sensor. Both work with 3.3V.

Recently a family member had his furnace fail while he was away from his house for a long period of...