The Arduino offers the advantage that a lot of people are using it so it is usually quite easy to get help or information via the internet. The main website for the Arduino is: http://www.arduino.cc/. The Arduino can also be programmed to behave in many different ways. It has 6 analog pins (continuously varying controls like a light sensor) and 14 digital pins (on off switches for example. All of these pins can be either inputs or ouputs meaning that as well as transducing information from a sensor a pin could be used to, for example, turn on a light, activate a motor or solinoid. Its analog pins offer a high resolution (10 bit) which means 1024 different values which is superior to the 7 bit / 128 values of a MIDI continuous controller. A disadvantage of the Arduino is that communication with software is not as simple as with MIDI although if you are using software for which there are already implemented interpretters such as MaxMSP or PD then this won’t be a problem. If you need to convert the Arduino’s data to MIDI you could try Junxion. If you just want to use the Arduino as a sensor interface you will need to program it with a so-called Firmata. This is a simple procedure which is carried out from the Arduino environment program, downloadable from the Arduino website. 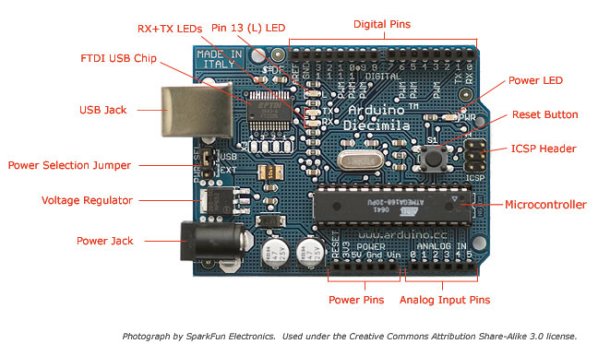 Another option we looked at for the input of analog / continuous sensors was the Doepfer Pocket Electronic The Pocket Electronic has 16 analog inputs and outputs data as MIDI continuous control messages so it is easy to interface with a wide variety of software and hardware.

The Doepfer CTM64 offers 64 digital inputs (on/off switches) and outputs each switch as either a MIDI note on/off message of as a MIDI continuous control message (on=127,off=0).

An obvious implementation would be to connect the switch inputs to the keys of a keyboard but any number of more imaginative implementations are possible.

We considered a number of sensors during the workshop. We built a ribbon controller. Below is a diagram of how it was constructed and how it could be connected to a sensor interface (either an Arduino or a Doepfer Pocket Electronic). Note the 10 kilo-ohm (10,000 ohm) resistor between the input and ground connections to prevent random values being generated when the ribbon is not being touched.
If you simply wish to connect a potentiometer to a sensor input here is how:

Light dependent resistors (LDRs) are cheap and useful sensors. Opposite is shown how to connect one to a sensor input.
Experiment with different types. Larger ones (with more wavey lines on them) will tend to provide a lower minimum resistance and therefore output a wider range of values. You can expect to pay the equivalent of 1 euro or more for a decent one.
Connecting two or more smaller LDRs can provide equivalent behaviour to a single larger one.
As this is a varible resistor (2 connections) as opposed to a potentiometer (3 connections) we need to connect a 10k static resistor between the input and 5v. You can experiment with different values for this static resistor, perhaps within the range 5 – 100k. Depending on the LDR you are using you will get a different range of output values but the scope of the range will probably not change. It is unlikely that an LDR will yield a full range of sensor values but obviously better lighting conditions will increase the range possible. 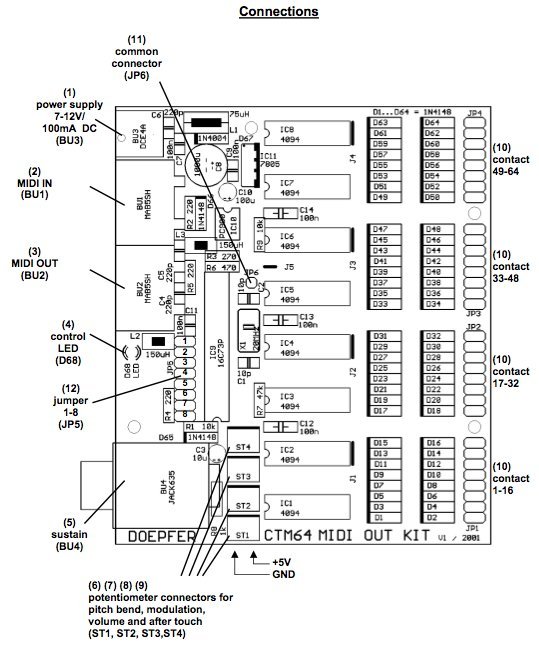 We looked at how to make a home-made pressure sensor from copper tape and anti-static packing foam but if you’re prepared to pay (at least 10 euro) you can get a professional one (referred to as a Force Sensitive Resistor / FSR and pictured opposite) which will have a lower profile and possibly be more sensitive. Again this device is a variable resistor as opposed to a potentiometer. This time we connect the sensor beween the input and +5v and the 10k resistor between input and ground. The reason that this is done the opposite way around than for the LDR is that whilst resistance increases as a hand is drawn over the LDR, resistance decreases as pressure is applied to the pressure sensor. It would seem to make more sense for sensor value to increase as an LDR is covered or as an FSR is pressed. The connection arrangement is the same for the home made version.
Other sensors worth investigating are flex (bend) sensors (1) which could, for example, be installed within the fingers of gloves to sense the bending of fingers, ultrasonic distance sensors (2) which measure the proximity of an object in front of them up to a range of several metres, infrared proximity sensors (3), which again measure distance of obstructing object but work best over a shorter distance and magnetic reed switches (4) which activate a switch when a magnet is brought close to them.
For more detail: DIY Sensors Workshop
Turnkey PCB Assembly