Last winter I experienced some problems with my car battery. I knew that it was about time to replace it so off I went to buy a new one. This fact reminded me of an old article about a car battery/charging system diagnostics kit I had seen in one of those 1980s electronics magazines. 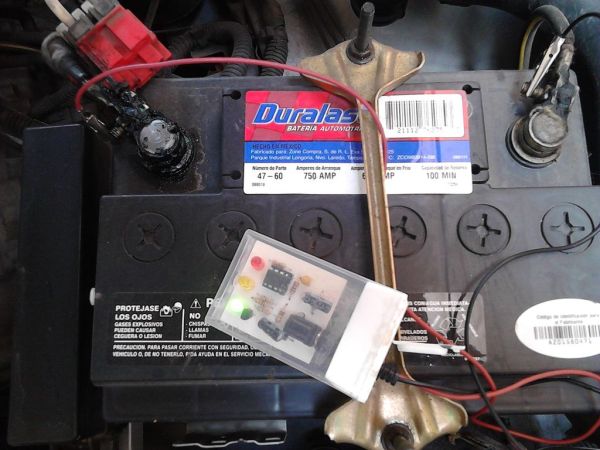 That magazine’s battery monitor relied on an IC that had several analog comparators arranged in a way similar to the ones in the old LM3914. This made me think about designing a more up to date battery monitor with today’s microcontrollers in mind which could use a low LED/resistor count and a reduced PCB size and possibly fit inside an empty 1oz Tic-Tac box.

I had originally envisioned building this battery monitor around Microchip’s PIC12F675. However, after reading several instructables on microcontrollers I realized that everybody seemed to prefer Arduino. I concluded that it was about time to get my feet wet in this family of microcontrollers.

After reading this instructable, I also realized it was possible to use Arduino and get a controller with the size needed for this project.

I hope you enjoy it as much as I did putting it all together. 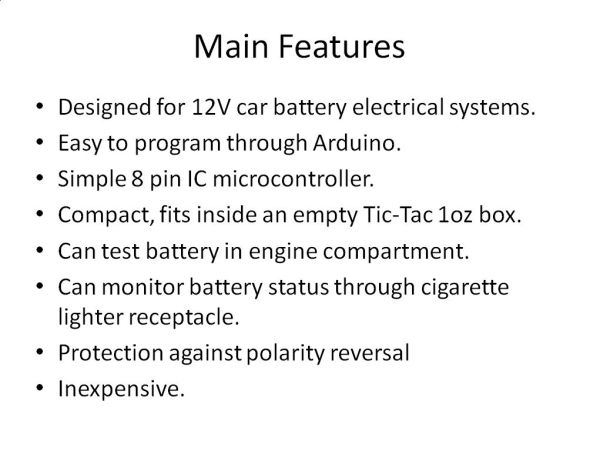 The operation of this battery monitor relies on what the battery as a voltage source “sees” as a load. Using basic electric circuit theory we have:

Which is the formula used to calculate voltage seen by ADC.

Battery voltage gets into the battery monitor through connector J1. Diode D1 is used to protect the entire circuit against accidental battery polarity reversal in case you decide to test the battery directly across its terminals in the engine compartment. Should you connect the test alligator clips reversed, nothing will happen.

IC2 is a +5V low dropout voltage regulator. Its input voltage range –with a 100mA load- varies between 5.4V up to its absolute maximum of 30V. I admit that for this battery monitor a 78L05 +5V voltage regulator would have been more than enough, however, I had no 78L05s and several LP2950CZA-5.0 kicking around in my junk box.  Capacitors C1 and C2 (22uF and 1uF) are voltage regulator’s input and output filters. If you want to use pin-compatible 78L05 voltage regulator instead, use a 10uF capacitor as C2.

The visual output to the user is shown by means of three LEDs. A Red LED (LED3) shows either too low a voltage or a dangerous overvoltage. A Yellow LED (LED2) shows a moderate low voltage and the green LED (LED1) shows good voltage and safe charging voltage. Each LED comes with its respective current limiter 330 Ohm resistors, R3, R4 and R5. Resistors R6 and R7 at 10K each are pull up resistors for unused inputs.

The software was written based on the hints given by Eric-the-car-guy in this excellent video. He didn’t mention the voltage at which a battery can be considered bad. However, my own car’s service manual stated that while cranking the engine, voltage should not get lower than 9.6V. If it does, then battery should be replaced which seems to be about right for most car batteries.

This sketch is very simple, just a series of consecutive IF instructions to compare voltage read through ADC3 with some predefined values. If you follow the code closely, you’ll see that the values shown in the Theory of Operation slide show in Step 1 are the same values used in the different IF instructions to decide which LED should come on.

To create the blinking effect on LEDs whenever voltages are higher than 13.1V, a counter is increased by one on every pass through that portion of the code. Before the code loops back to read ADC3 again, execution is delayed 100 milliseconds. IF instructions turn LEDs on whenever the pass counter is below 6 and turn LEDs off whenever counter is between 6 and 11. Once counter reaches 11, the counter is reset to zero to repeat the cycle.

ADC3 input is used to read the analog voltage coming from the voltage divider. By the way, ADC0 had been the first choice as this project’s analog input, however, when voltage coming from the battery was a bit lower than 8.7V all three LEDs would go out.  This didn’t seem right as I had used a low-dropout voltage regulator. After doing some more research on the web I found that anytime you used a pin as an input  that could also function as hardware Reset, these things could happen. Once ADC3 was selected as analog input, battery voltage could come down close to 6V and red LED would still be on which means the software would still be running. It was then that in order to prevent further problems, unused pins 1 and 5 were pulled up to +5V through 10K resistors.

For more detail: Troubleshoot your car battery with ATtiny