I’ve been thinking about building stuff with FPGA’s for a while, and usually get turned away because FPGA’s are considerably harder to implement than microcontrollers since they have no on-chip memory. It is necessary to re-program the gates every time they power up, which requires an external flash memory chip. There aren’t great references online for the DIY community, so I figured I’d post how to get this working. Not using dev boards opens a world of opportunities, so I’m a proponent of not using Arduino’s and their FPGA equivalent for too long (sure, they’re good to get started with, but don’t become dependent) 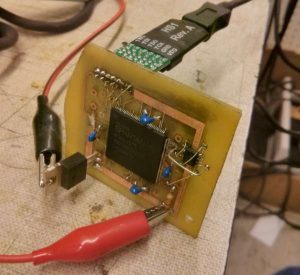 Not wanting to screw up an expensive complex board by being a first-timer at putting an FPGA into a circuit, I figured I’d build a little test board with the cheapest Spartan 6 you can get (about $10), which comes in a solderable TQFP144 package. Sadly, most high end FPGA’s are BGA and therefore quite hard to solder as a DIY project.

The first task is to select a PROM chip. There are a number of series that are recognizable by the XILINX iMPACT tool. The M25P series is cheapest and very popular. You’ll need to read the datasheets to figure out how much memory your FPGA needs. I’m using the Spartan LX9 in my production board (although LX4 on this test board since it’s half the price), so I selected a 4M PROM. The M25P40 is only 67 cents on digikey in qty 1!

I’m using the Digilent JTAGHS1 programmer, since it’s the cheapest programmer that’s guaranteed compatible with Xilinx iMPACT (the programming application provided in ISE, the Xilinx IDE). At $55, it’s not the cheapest thing but you only have to buy it once and it’s way cheaper than the Xilinx brand programmers.

For applications such as motor control or power supplies, it’s often necessary to know whether the ac line is at...