So I mentioned in an earlier Instructable that I am a teaching assistant (TA) for an introductory engineering course for biomedical engineering majors at Vanderbilt University. My main task as a TA is to re-write a few laboratory exercises that the students will be performed during the class. One of the laboratory exercises was to implement a simple circuit to measure the someone’s heart rate using photoplethysmography. 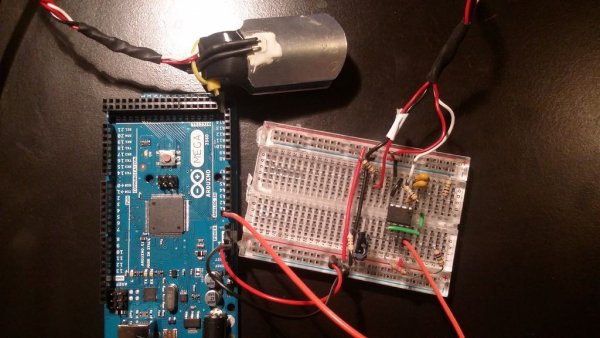 The current produced by the photodiode is converted to a voltage by an amplifier and read by the Arduino. Here we go! I hope you enjoy reading and building!

For the general purpose op amp, I used an MCP6002 which can be purchased from any major electronics distributor such as DigiKey.com, Mouser.com, or Newark.com. I purchased mine from Newark. I liked this op amp because it is single supply, meaning it only needs to be powered using ground (GND) and a positive voltage. It does not need a negative voltage supply like many other op amps. This enables it to be easily integrated with the Arduino which only runs on a positive supply. If you use a bipolar op amp, you have to make sure the op amp and Arduino are running on the same GND and positive supply. Do not connect the negative supply to the Arduino. You will fry something on it. I have done it before.

We will be creating the circuit depicted in the corresponding image. The circuit has three main parts:

I will explain these various parts in the next sections.

As I stated before, the finger cuff has a photodiode (I don’t know the part number) and IR LED integrated into it. Both components have wires that connect them to the Arduino.