I became interested in model railroading a few years ago. It’s a hobby that requires skills in precision painting, model building, scenery design, wood working, electrical engineering and about a dozen other skills that I’m forgetting right now. It is an excellent creative outlet.

Realism can be a part of the hobby, like laying out a train line complete with all the scenery with historical accuracy. You can also choose to just build a fantasy land complete with cities, realistic grass, unicorns and Godzilla-like monsters fighting Transformers for rule over the land. Regardless, you will be assembling and painting a variety of buildings to enhance the world you are creating.

I’m writing about adding some realism to the town: lighting. You can light a building by just plugging in a bunch of little model light bulbs and light everything in a uniform way. Towns don’t work like that though. People move from room to room, lights go on and off, street lights flicker, restaurants change the lighting through the night.

We’re going to look at how to use an Arduino, a few TLC5940’s and diorama skills to script the LEDs of a part of a town to create realistic lighting. 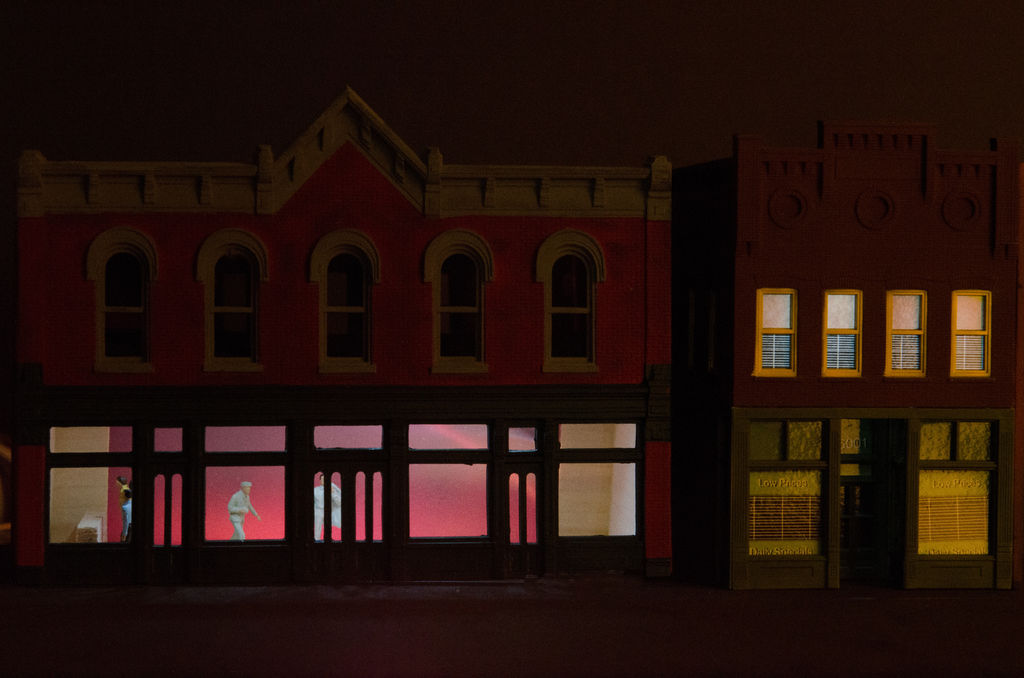 This looks like a long and expensive list of tools. You may have many of these tools already or those that can do the job just as easily.

Some of these parts are optional and you have alternatives. I used three retailers: Amazon, Mouser and Jameco. All three delivered within 2 days thanks to Amazon Prime, Priority Mail and really fast customer fulfillment.

The list is ordered by who fullfilled my order:

A note on Microtivity: Every part worked fine. The straw hats have a very wide angle and are great for building lighting. The RGB and white both draw 20mA according to their data sheets and that made it much easier to share the TLC5940’s with both types. My regret was that I went with the prototyping board instead of a solder breadboard or strip board because of the time spent soldering bridges and buses. You will improve your soldering skills though.

Note: The 2K resistor is based on a formula in the TLC5940NT’s data sheet

Part 7 is just a 40 pin single row snappable header. You will need 64 pins per node board, which I’ll describe in future step. You’ll need two 40 pin headers per node board. Also, it is easy to miscount the number of pins you need when snapping them off so get a couple of extra headers for mistakes.

Note: Some of the parts above say “have 10 of this or that.” Some vendors have minimum orders or parts like resistors and capacitors.

Step 3: Overview of lighting the buildings

The above ground setup will be just two buildings to demonstrate building lighting.

The LEDs are strung together on the channels to create a LED strip. Make a strip by measuring the windows you want to light. Draw lines on the strip to show room dividers and LED locations. Use the hammer and nail to punch holes for the LED leads. Create notches in the strip for the leads to bend into (see picture) using a file or something similar. Having LEDs off center from a window gives the effect of normal lighting.

Test that the strip works before proceeding.

Each LED on the strip is covered with a separate paper box. Use thick white paper or cardboard to make the box. Use the foam to cover the box to make it mostly light tight. Make sure to connect the LEDs to a Node before glueing the box to the windows. Test again that the LEDs work.

Note: Light bleed can be a challenge. Your wrapper on the LEDs should be as light tight as you can make them so they only light the window. Also, the light can bleed through other windows too.

Model makers use different manufacturing methods that impact lighting. First, some walls are very thin and the LED will bleed through the wall itself. Paint around the windows or better still, glue some white or black foam around the windows. Do not use other colored foam as it will change the color of the light.

Some manufacturers make the models with walls that are not square. Foam and sandpaper works really well in these corners.

I use a bright flashlight to see all the places where light bleeds from my corners and other joints. It is easy to patch those locations using the foam or other materials.

Step 4: Overview of the controller code

The code manages LED clusters of either white or RGB. The bar or nightclub demonstrates a mix of both.

The RGB LEDs follow a sine wave. The code originally calculated the value for the “lead” LED and then iterated it down to the other RGBs. The calculations were amazingly slow. Improving the speed required pre-calculating the entire sine wave and statically storing it in an array. The code runs significantly faster as a result and allows us to whip through all the LEDs.

The LEDs are clustered in the code. The RGBs are one cluster. One set of windows are another and so on. Each LED has start and end time fields that indicate how many milliseconds to wait before performing an action such as changing the color, turn on or turn off.

The loop() function will iterate through each LED cluster and you may notice slight delays as the code has to iterate through all the LEDs and then perform an update to set their state. A small delay is one of those bugs that’s a feature. It adds some variability to the duration of the LEDs, making the lighting a little more realistic.

Note that all times are hard-coded. You could change this so the lights run for a random period.

Please be careful with the white LEDs and the brightness settings you choose. The TLC5940 has steps that go from 0 (off) to 4096 (leaves spots in your eyes). I have lowered the default LED brightness to something very low to see the LED work after foolishly setting the LEDs to their maximum and having a hard time seeing anything but spots afterwards. You will have to set the LEDs to a higher value once installed in the model because windows and other items may diffuse or block the light.

First, you need the TLC5940 Aduino Library. The installation directions are out of date. Download the library and unzip into a temporary directory. Then open the Arduino editor and go to Sketch ->Import Library and add the library. The editor will do the rest. 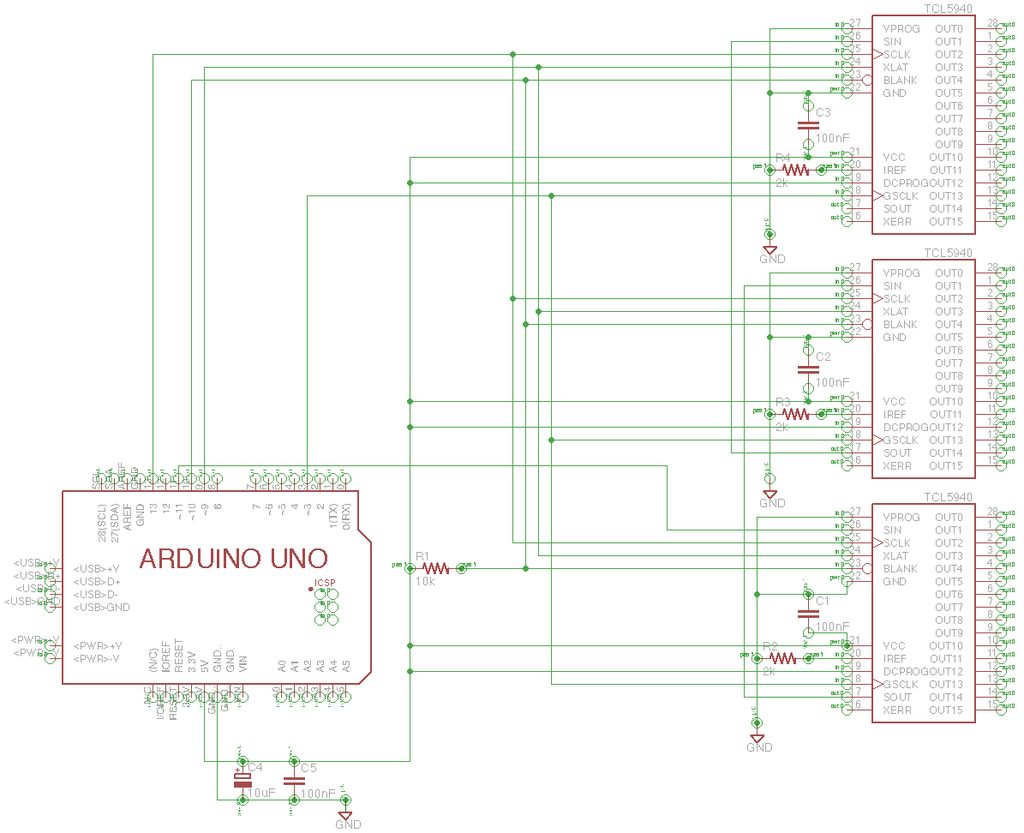 Edit the tlc_config.h file to modify the number of TLC5940’s you are using. This project runs thee TLCs so the line reads

The code is pretty straightforward from here and is commented. I have some comments at the end too.

For more detail: Creative diorama lighting with the Arduino and TLC5940