In early 1990s lithium-ion batteries started gaining popularity as a substitute for nickel-cadmium batteries. They have higher energy density, low self- discharge, and low maintenance, but it was soon found that they have short life span, unstability which causes security concerns and creates the need for protection circuits (to maintain it within safe limits), and are really expensive to produce. Lithium is scarce (or is soon going to be), only 0,06% of earth crust is made of this material and its mainly found in South America. A start up called Tiamat formed by scientists at several French universities proposed an alternative to lithium-ion batteries, they developed the first sodium-ion battery in industry standard 18650 cell size. 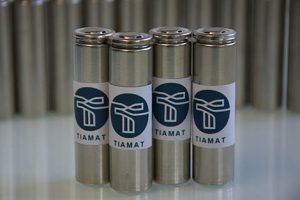 Unlike Lithium, sodium makes up 2.6% of earths crust which makes it the sixth most abundant element. As a raw material sodium sells at about $150 a ton compared to $15,000 a ton for lithium. Sodium batteries are cheaper to produce than lithium batteries, leading to a lower selling price. Also, the lifespan is about ten years compared to lithium which is 4 years and Sodium-ion batteries can last for up to 5000 charge/discharge cycles. Tiamat batteries are not a fire hazard, and provide more stability for a cheaper price.

Scientists want to use these batteries mainly for mass storage of interment renewable energies such as solar o wind. Tiamat is not looking to make Li-ion batteries disappear, instead they want to focus on their long lasting power, and use it for stationary storage. This type of battery could be used in electric cars to allow lasting trips with short recharge time. Production has not started, but when it is approved, and they start to sell France could become a leader in this type of technology. This startup has the support of RS2E (Réseau sur le stockage électrochimique de l’ énergie) a French research network dedicated to energy storage devices, and they plan to launch the product on 2020.

A few years ago I saw an Instructable where Groover had used a pair of DVD-RW drives to make a pocket laser engraver....