We’re going to show how to wire up and control an Ikea DIODER LED strip with an arduino, using a 16X PWM LED Fader board as an intermediary.

The 16X PWM board is basically a bunch of mosfets under PWM control (switches that turn on and off really fast) that can be used to mix different levels of the main three DIODER colors: red, green and blue. The PWM board also has a bunch of fading and sequencing commands built in, so the arduino code is fairly simple. 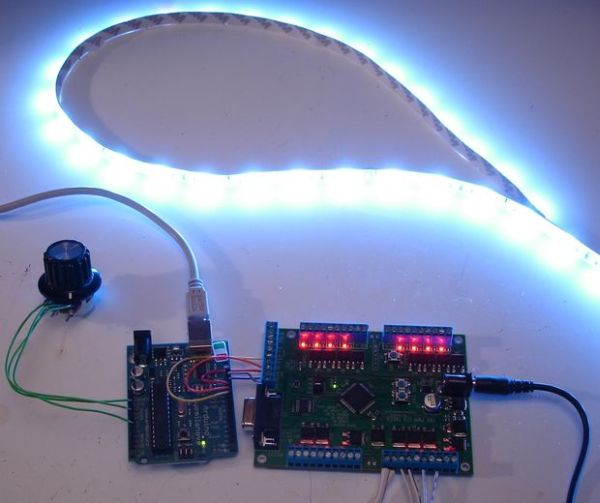 The 16X board could also be controlled from a serial port, but adding the arduino provides a lot more capability, like being able to control the lights based on a pot input, or maybe a color sensor to emulate ambient lighting…

Somebody on youtube asked how the LED strip electrical circuit, so here are some details if you’d like to use completely different electronics to control the Dioder, or many other LED strips.

Most of these strips are made to accept 12V, no matter how long the strip is.  The LEDs are arranged into groups of 3, and the strip can be cut between each group.  Electrically, each group is wired in parallel. So whether you have 1 group, or 100, you always supply 12V.  Each additional group requires more current and power.

This arrangement makes it very easy to fade the LEDs by varying the voltage with PWM switching.  Even if the total length changes, the fading circuitry stays the same as long as it can handle the additional current. 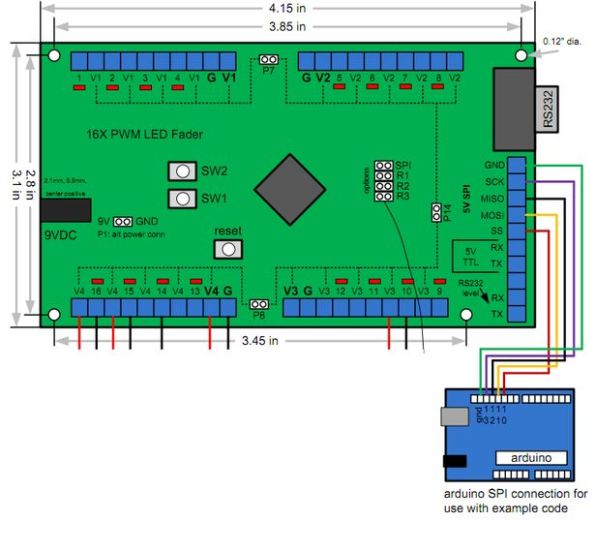 The first step is figuring out which wire is which on the Dioder. By applying 12V to the different pins on the LED strip, we learn that the red, blue and green colors can be turned on as shown in the sketch. The 16X Fader board simply acts as a switch to ground for all three channels.

Cut and strip the 12V side of the power block. The wire with the writing on it is 12V, the other ground.