The PC to Arduino Bluetooth serial connection can be useful in many applications such as controlling servos, motors, and writing to LCDs. The Arduino to PC connection can be useful in applications where the Arduino reads sensors then pass their values  via serial Bluetooth to a PC for processing. The distance for this transceiver is about 30 feet or so but it really depends on many other variables. This is ideal for indoors projects. 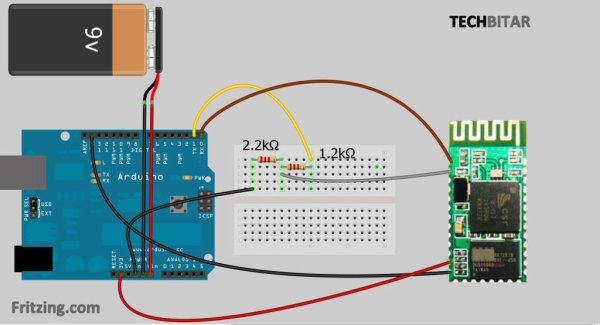 The Bluetooth serial module I bought has the following specs:

During my research, I have benefited from many projects on this and related topics. I have listed them in the references section.

1) In a previous project, I used a Pololu Wixel and an Arduino to control a robot remotely from a PC terminal. Here, I will show similar data exchange functionality but without the robot.

2) I also hacked the RF system of cheap wireless car toy and used the Arduino to transmit signals.

Check the video to see how these demo sketches work.

I have two Arduino test sketches. The first one is a “send test.” The Arduino microcontroller sends numbers to the PC over serial Bluetooth. So if you have a terminal emulator running on your PC, such as Tera Term, you will see a list of numbers rolling down your emulator’s screen.

I have done almost no error trapping in my code to keep the code clear and simple. I trust the developers will add it per their requirement.

— Arduino Uno (R2) or clone.
— Bluetooth serial transceiver connected to Arduino. I got one from Ebay with the BlueCore4 chipset. Search Ebay for Wireless Bluetooth Transceiver Module RS232 / TTL.
— Bluetooth USB dongle to be connected to PC. I used an old MSI pc2pc Bluetooth as well as a Bollionton Bluetooth USB dongles and both worked fine.
— The 1.2K Ohms & 2.2K Ohms resistors will be used as voltage dividers to drop the Arduino’s 5V to about 3.3V. You can substitute these with 10K Ohms & 20K Ohms resistors. If you know how to calculate voltage dividers, feel free to use other values for your resistors.
— Breadboard and jumper wires.
— Power source. I used a 9V battery.
— Any PC that supports Arduino IDE will be needed to program the Arduino microcontroller.
— Most PCs and  smartphone w/Bluetooth and a terminal emulator can be used to control the Arduino.

— Windows 7 64-bit. But this should work on other platforms supported by the Arduino IDE.
—  Arduino IDE 1.0
—  Tera Term Pro  terminal emulator but other similar emulators should work.
— Tera Term by the original author of the software

With its eyes on the growing market for portable medical systems, Analog Devices is aiming to win designs in both...