WCH (Nanjing QinHeng Corp.) has recently launched a CH55x family of microcontrollers based on an 8-bit C51 core with a USB interface, and I/Os. The boards all come with different I/Os configuration depending on the selected part number. 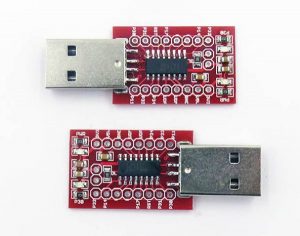 Electro dragon, the popular online store that offers a range of electronic components is now listing one of the development boards – a tiny USB development board based on the CH551 for about $1.80.

This tiny, low-cost USB development board has 1x USB type-A port, onboard power led, LED (P3.0). One advantage peculiar to the board is that its microcontroller unit (MCU) supports USB to TTL conversion of the shell without the aid of an external converter as compared to some other development boards. For example, the official Arduino Uno doesn’t support USB to TTL conversion of the shell; it features the Atmega16U2 (Atmega8U2 up to version R2) which is programmed as a USB-to-serial converter. This feature not only makes the board smaller but also cheaper since no extra cost is spent on adding a USB to Serial driver chip.

The board can be programmed without external hardware tool using either WCHISP windows tools or open source flasher LibreCH551 plus SDK which works with both Linux and Windows. However, its own compiler has no libraries, so a suitable substitute is the SDDC compiler. The only glitch with using an SDDC compiler is that the libraries for most devices have not yet been built. Another important factor to be taken into consideration when programming with the flashing tool is that flashing or programming is limited to 200 cycles due to a bug put by the creators.

Below are some of the specifications of the board:

Electro dragon will also release other versions of the family boards based on the CH552, CH554, CH558, and the CH559. The CH551 board is obviously going to be the cheapest of the product line, and the CH559 board is expected to be the most powerful board which comes with more advanced features.

Experts on cognition tell us that most people think they know more than they really do. One particular indicator for...