Ever wanted to visualize your brain activity in real-time? Move an object on a screen with your mind? This tutorial shows you how to make a recreational EEG beanie that turns brainwaves into light, using a microcontroller, LEDs and a special chip that processes brain activity. It also demonstrates how to use the hat to control audiovisual interfaces in Processing.

To make this toy EEG device, I connected the ThinkGear ASIC Module (a chip from Neurosky which processes real-time brain activity) to an Arduino. The custom Arduino firmware then converts these brain signals into light of different colors, intensities and brightness, which change according to the mental state of the wearer. Neopixel LEDs are integrated into the hat’s pompom, however if you prefer you can place LEDs elsewhere on the hat, or on an accessory (for this you will need to include bluetooth). All the small electronic components are hidden in the fold of the hat, so it looks and feels as though you’re just wearing a comfortable beanie. 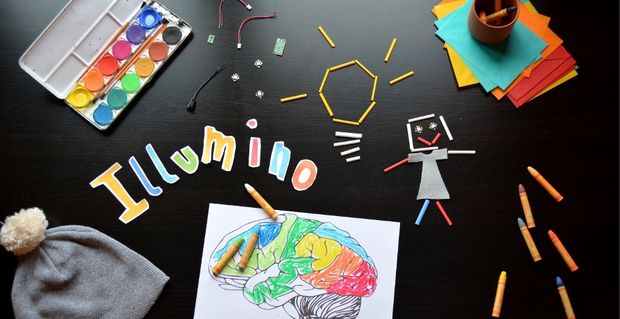 …and here’s a video of the testing of the hat (before putting the LEDs into the pompom and securing the battery onto the hat yet, hence the hanging wires). Turn on the captions for explanations!

Connecting the beanie to Processing

The Arduino is easily accessible via a micro USB connector hidden inside the hat´s pompom. This allows you to create live interactive “brain art” with the hat, using a programming language such as Processing. Simply connect the micro USB on the pompom to your computer´s USB port, and import the real-time serial stream into Processing (or wirelessly if you make the hat with bluetooth). Then customize your Processing sketches so that the levels of “attention” and “meditation” control the sketch variables (such as color, opacity, movement, coordinates, rotation speed, etc). To get you started, I’ve included in step 13 the snipet of the Processing code you will need. There are endless possibilities: you can draw, write words, control moving blobs, play games. Here are two simple examples, full screen in HD for best effect!

Fly a bird using your brainwaves: In this example, the real-time amount of “attention” controls the vertical flight of the bird. The more I concentrated, the higher the bird flew. It takes some training to get used to it! You could also control, if you wanted, the speed of the wings flapping, or the trajectory of the flight, etc. Script was adapted from the original sketch by Liana.

Brainwaves controlling the color of a blob: In this example, the real-time levels of “attention” (green) and “relaxation” (turquoise) control the color of the blob. Script was adapted from the original sketch by Oggy.

Enjoy building your brainwave hat! If you know teachers or classrooms who would love to make an EEG hat, please share this project!

To stay up to date on our upcoming projects, please visit www.illumino.io. If you write about this project, thank you very much for sharing, and please link to this instructables tutorial.

In this tutorial you will learn how to read the status of a digital pin of Arduino. I hope that you already...