After attending a conference where the $1 million “sea-sick flashlight” (named “THE DAZZLER”) was demonstrated by the US Dept. of Homeland Security, we decided to create our own version. For under $250, you can build your own dazzler and we’ve released the source code, schematics and PCB files to make it easy. A great Arduino project for people who really like blinking LEDs. We also added in a mode selection so you can put it into some pretty color-swirl modes, great for raves and parties! 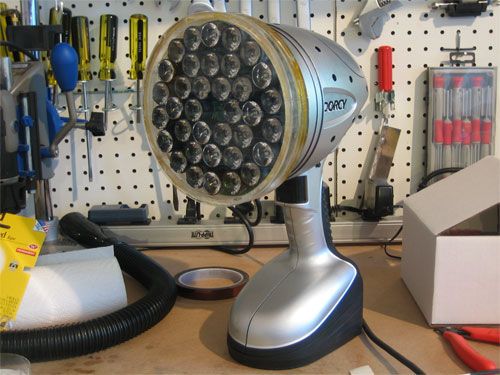 Yes this project does indeed cause: Nausea, dizziness, headache, flashblindness, eye pain and (occasional?) vomiting! So don’t use it on your friends or pets.

Please note: This is not a kit, nor for sale…so don’t ask us. All documentation is on the design and download pages.

This project isn’t a kit (and won’t ever be) so the instructions are more laissez-faire, with many opportunities for the maker to change elements or modify the design. Take it more as a guideline (and use common sense) than a rigorous step-by-step!

To make this project you’ll need:

You’ll want to start by getting an LED plate fabbed at your favorite PCB manufacturer and acquiring all the materials necessary (image 2a).

Start by soldering in one color of LEDs (in the photo there are a few LEDs soldered in from other strings. Go with green to start. (image 2b)

You’ll want a nice powerful soldering iron, use leaded solder since its hard enough to solder to the copper plane! (image 2c)

For testing you’ll want a benchtop supply, or use an ATX power supply with a jumper between the green power line and ground (image 2e)

Test the LEDs to make sure you put them in the right place. Each ‘string’ is 6 LEDs. (image 2f)

Solder in all the green LEDs (image 2g)

Step 3: Build it: The Controller

Once you have a single color in place, you’ll want to build the controller. I used a boarduino (Arduino clone) but any microcontroller is fine. Wire up the power FETs so that the gates are connected to the hardware PWM outputs, and the sources to ground. (images 3a & 3b)

To make traces on perfboard high-current-capacity you can use a 20 gauge wire as a backing and solder on top to make a path. (image 3c)

Which you can sort of see here (image 3d) 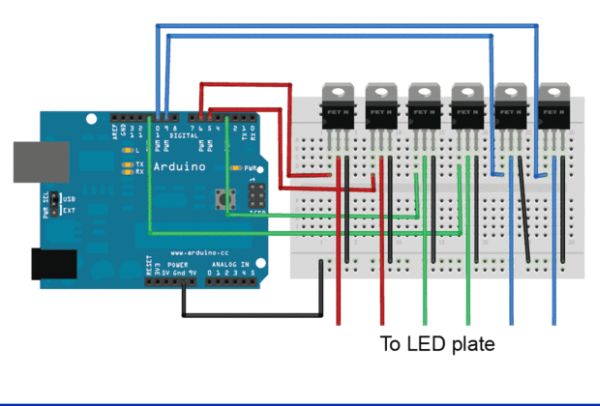 Step 4: Build it: Testing & The Heatsink

Complete soldering in all the LEDs (image 4c)

A final test PWMing through all the LEDs. It heats up fast so keep the max power low and/or dont run it more than half a minute. (image 4d)

Since we were too cheap to get a proper metal PCB, we’ll be attaching a heatsink to the outside. While far from ideal, a spare AMD processor heatsink worked just fine. Remove the fan, take off the metal clip and then reattach the fan. Check the fan to see if it will run off of 9V. Ours did OK (image 4e)

If you have thermal paste, spread some on the heatink. If you didn’t tent the vias, use kapton tappe or similar to prevent them from shorting to the heatsink (image 4f)