Skip to content
This is the third part of our BaW-Bot (Bells-and-Whistles Bot) build – 5 separate instructables that look into different Arduino-related technologies, combining to create a Bot with all the bells-and-whistles.

Part 1: Build an Arduino on a Board
Part 2: Build the motor-controller & body
Part 3: Adding Sight and Touch
Part 4: Blinging up the BaW-Bot
Part 5: Taking it to the Next Level

In this instructable, we’ll be giving our Bot some freedom by adding sensors to keep it safe.  We’ll be adding an ultrasonic sensor (“eyes”) as well as 2 lever microswitches (“whiskers”).  We’ll also be building a “leash” so that we can keep it out of trouble while we develop the bot.

You’ll need the following parts, as well as the body and Arduino you built in Parts 1 & 2 of this series.  There are many different models and manufacturers – I’ve simply linked to the parts I have, you can opt for your own preferred supplier/model: 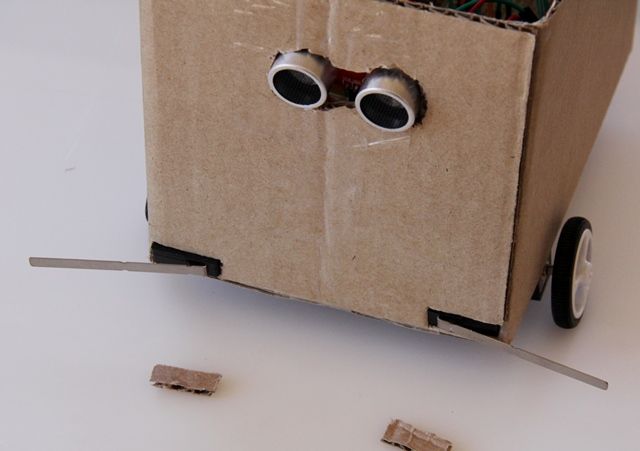 You may have struggled with the Bot during the previous instructable, as it starts driving around as soon as you connect the power.  Let’s get it under control, so that it only starts moving once you press a button on a remote – and stops moving when you press the same button again.  The “stop” button will become useful as you start experimenting with sketches that help the robot avoid obstacles.  As you know, most remotes use Infrared (IR) – so the next few steps will take us through implementing this.  We could have used a simple push-button, but this is more fun…
Help from Ken
Ken Shirriff has written a few great blogs on getting IR working on an Arduino (check out http://www.arcfn.com/), and has also written a very useful library.  We’ll use that library for this instructable (thanks Ken!) – even though we won’t use close to all the functionality it offers.

To begin, download the library from the link on Ken’s page on his Infrared Remote Library and unzip it into your Arduino folder:
arduino\libraries.

If you’re using  version 1.0 or higher of the Arduino  IDE, you’ll need to edit the file “IRRemoteInt.h” and change the line:
#include <WProgram.h>
to
#include <Arduino.h>
Then restart the IDE.

Remove the Boards
Remove the breadboards from the body, so we can work on them more easily.  Make sure you disconnect the motor power supply – we don’t want the Bot to run away from us while we’re testing.

This is pretty self-explanatory – the module will be powered by Vs and GND, and will send a signal to Pin 12 when it receives an IR signal.

Upload a Test Sketch
Upload the sketch below using the FTDI breakout board.  This was written by Ken, and simply prints out any IR codes the sensor receives, to the Serial monitor (I have modified to print decimal instead of Ken’s original hex).

Point a number of remote controls at the sensor, and watch what comes out on the serial monitor when you press their various buttons.  You should see output similar to the image above.  Do you notice that each button generates a slightly different code?  These unique codes will allow us to write a sketch that reacts to a particular code – i.e. a particular button on a remote.
In some cases one button might generate multiple codes, or holding a button down could result in a single code repeating – we’ll ignore these for this project. 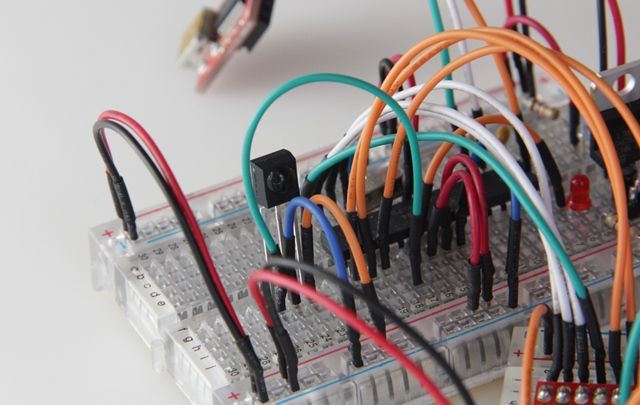 Copy the Code for your chosen button
Now that you’ve seen how the codes appear, press the button that you want to use to stop/start the BaW-Bot.  Now copy and paste the code from the Serial Monitor into a temporary test document – we’ll need it later.

Now let’s put this code to good use.

Step 5: Get Things Under Control

Before we continue, let’s see how the remote works with your bot.  Put the boards back into the BaW-Bot, and download the sketch below.  This is a very simple sketch that moves and turns the bot as you press your chosen button on the remote.

For more detail: BaW-Bot Part 3: Adding Sight and Touch to the Bot