So if you are like this Lazy Old Geek, you have a lot of rechargeable batteries lying around. I wrote another Instructable with some battery tips.
http://www.instructables.com/id/Rechargeable-Battery-Tips/

Amongst these batteries, I have a lot that no longer work or don’t work very well. So I decided to try to revive them.

First step: If the battery isn’t totally dead, stick it in something like a flashlight, turn it on and let it run until it stops working. Try to recharge and see if it works better.  I tried this with a couple of cordless drill batteries and was able to ‘restore’ the battery packs. 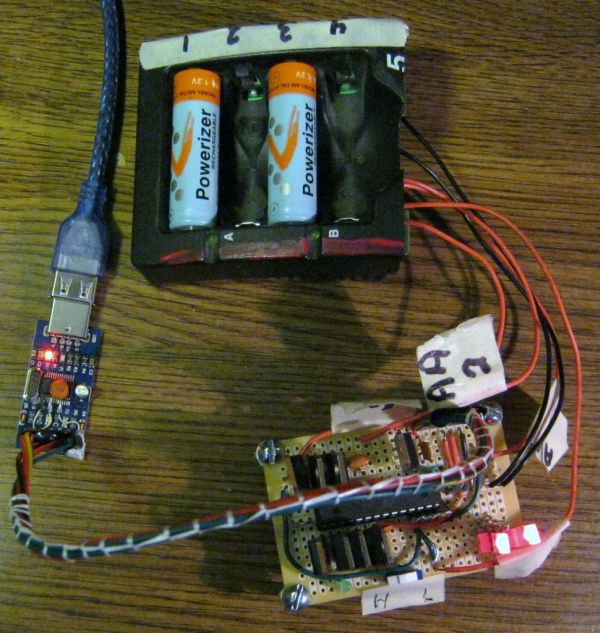 Second step: However, I have a lot of AA and AAA batteries that still didn’t work. I also have a bunch of battery chargers but none of them will recondition batteries very well, so I decided to make my own.

Well, after years of diligent research (well, actually it was more like days and not very diligent), I decided this method had the most promise:
http://batteryuniversity.com/learn/article/how_to_restore_nickel_based_batteries

Okay for the technically challenged, the basics are:

1. Fast discharge the battery from 1.2-1.4 volts, down to 1 volt.
2. Discharge it slower to about 0.4 volts. Then recharge and see if it works.
This may have to be repeated several times.

My Design criteria for a battery reconditioner:
Individual circuits for each battery.
Discharge up to 3000mA AA batteries.
Do up to four AA or AAA batteries at a time.

So, since I’m an Arduino Geek, I decided to use an Arduino.

But first, I needed a holder for AA and AAA batteries. Well, I didn’t have any readily available and didn’t want to try to make my own (as seen in many Instructables). But I did have an old Panasonic battery charger that I didn’t really like (See rechargeable battery tips). This one will take AA or AAA batteries.

So I took a screwdriver and opened it up. (see picture). All of the battery contacts are on the PCB. So I took my trusty $4 soldering iron and some solder wick and removed most all of the components.

Now I don’t expect very many readers will have one of these around but you can probably make or buy suitable battery holders. So I’m not going to go into a lot of details about how I modified the PCB. Here is the design criteria for my battery holder:

This Panasonic charger actually charged in pairs so that you had to charge two or four batteries at a time. So I had to do some cuts on the PCB. Then I also had to jumper the AA and AAA positives together for each slot.

Caution: The wire I used is 22AWG. 22AWG is rated for 7 Amps (7000mA) so will handle the currents for 3000mA discharge rate. Since I will have up to four batteries at a time, I have two ground wires. Make sure your wiring can handle the current.

I cut up the housing and labeled the battery slots. (see pictures)

So my first design was using TIP122 Darlington transistors to discharge the batteries. I also purchased some ICs to measure the current so that I could discharge the batteries at the proposed ‘1C’ rate which is 3000mA for 1 hour. I selected the TIP122 because it can handle 5A (5000mA) continuous.
But I couldn’t get these to work. I think the main problem is that when drawing 3000mA, the ‘On’ voltage is over 1 volt. So if the battery voltage is only 1.2 volts, there is not enough difference for the TIP122 to work.
Failed: First design

My Design 2 was to use 5 volt relays to connect resistors to discharge the batteries. Now this actually worked and I will provide information in case you might want to try this method.

Now I only have two relays but these are DPDT relays so I could control two circuits with one relay. With this limitation, I could only discharge two batteries at one time.

Caution: You also have to watch out for power. P=IE = 3*1.2 = 3.6 Watts. Most little resistors are ¼ Watt and would burn up. So you need higher wattage resistors.

Stage 2: Slow discharge from 1.0 Volts to 0.4 volts over a couple of hours. Unfortunately, they didn’t give a discharge current. But I made an educated guess and decided to use ‘½ C.’

So in theory, back to Stage 1, I need a 0.4 ohm 3.6 Watt(or higher). Okay, these might be available but I went a different way. If you have two resistors in parallel, their resistance is divided by two and by the way, the wattage doubles. (See pictures)

FYI: These relays can handle 8 Amps per contact and the contact resistance is 100 milliOhms or 0.1 Ohms maximum. Actually, this adds a little as each circuit could be up to 0.9 Ohms and two in parallel would be 0.45 Ohms but that’s close enough.

Now, I am not going to explain the point to point wiring for this circuit is rather extensive. Hopefully, you should be able to figure it out from the schematic in the picture.

Here’s some basic guidelines:
For this version of RBBB, I added male header pins sticking out the bottom of the PCB so that it will plug into a breadboard. I made a little template with Excel to identify pins and match them up to my breadboard. See picture.

This breadboard has a + and a – rail on both sides so I connected grounds and +5 volts to both rails.

More details on using the G2RL-24DC5 are available in my Instructable:
http://www.instructables.com/id/Arduino-Remote-Control/ 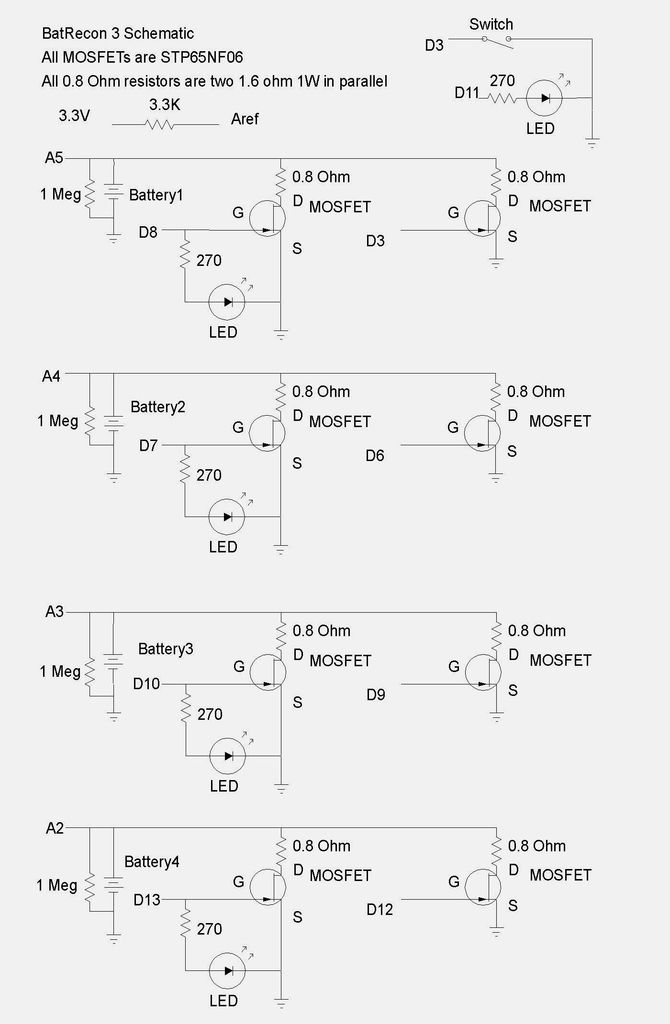 This is mostly electrical theory and can be skipped by all you practical readers.