About a million people have died over the past 5 years in unmanned railway crossings all over the world. At least 1/3rd of the railway crossings are unmanned due to their remote placement and less traffic. The Automatic Railway Gate Control System using IR Sensor & Arduino focuses on systematic traffic control of railway gates that are both manned and unmanned. This project will not only make the system more reliable & precise, but also save the authorities from hiring man power to do the job. You may take it as a onetime investment. 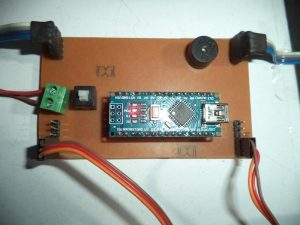 The Automatic Railway Gate Control System Project makes use of an Arduino Nano to control the whole circuit. Two Servo motors are used to open and close the railway gates. Four IR sensors are used for sensing the arrival or departure of train. The main objective is to close the railway gates when the train approaches it, so as to block vehicles from going across the track. As soon as the train moves further away from the railway crossing, the gates must automatically open to allow vehicles to cross by.

The automatic railway gate control makes use of 3 PCB’s. One is for the Arduino Nano, which works as controller of the whole project. The other two PCB’s are needed for the IR pairs. I designed all the three PCBs on EAGLE CAD software. If you want to make etched PCB, refer both the figures given below.

If you want to make the circuit on zero PCB or breadboard refer both the figures given below.

Output of all the sensors are connected to A0, A1, A2 and A3 pins of Arduino.

The pins D9 and D10 of the Arduino are PWM pins. These pins are connected to the Servo motor. Servos are controlled by sending an electrical pulse of variable width, or pulse width modulation (PWM), through the control wire.

IR pair is made with dual Op-amp IC LM358.  Only one IC is required for a pair. A preset is used for calibration. 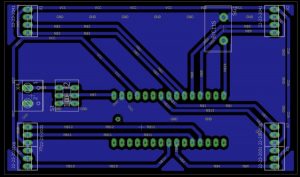 Two IR pairs are used in the project. If you are familiar with PCB etching you can etch the PCB, but it is not necessary to use the etched PCB, you can use two IR sensors instead of one pair that is easily available in market. 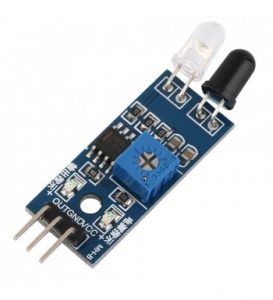 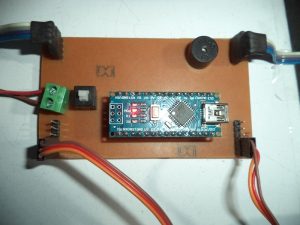 Four sensors are used in the project as two pairs of two sensors; these sensors are kept in the both side of level crossings gate as shown in Fig 1. All the sensors are connected to Arduino. 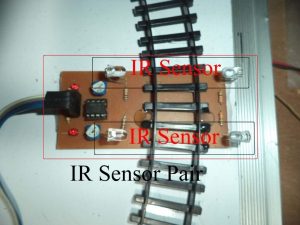 Servomotors are used in the gate because it is very easy to use and does not require any driver IC or circuit. Servo motor has three pins. The first pin is PWM, second is Vcc and third is GND. Servo motor receives the PWM signal from Arduino and rotates the motor at fixed angle according to duty cycle of signal. 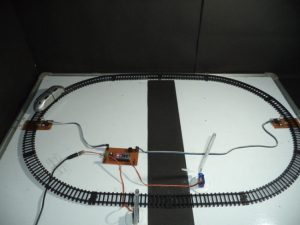 There are two presets in an IR pair circuit. Before calibration make sure that IR LED and photo diodes are placed in front of each other, and falling on Photodiode

Now rotate the preset, till the indicator LED does not glow.  When some barrier is placed between LED and Photo diodes, indicator LED starts glowing. This calibration procedure has to be done for all the sensors.

In the video, the speed of closing & opening of gate is slow, so it would be better if you will use the slow train. For increasing, the speed of opening and closing decrease the delay in line 71, 73, 84 and 86.

Now some integers are declared, “pos” is the position integer for servo. After that, four sensors are declared named “sensor1”, “sensor2”, “sensor3” and “sensor4” are used to connect Arduino after it an integer is declared by name buzzer.

In the void loop section if condition is used, When value in EEPROM address1 and address2 is become zero, system come in if loop. Now a while loop is used when train come and cross the senaor1 system come in this loop, after that an if is used when train cross the senaor2, EEPROM (0) and EEPROM(1) are updated by one. This same approach is used for sensor3 and sensor3.

Another “if” loop is used in line 48 and it become true when value of EEPROM(0) is Zero and EEPROM(1) is One. After it while loop is used and it become true when train cross the senaor2 and when train cross the senaor1, EEPROM(1) is updated by Zero and EEPROM (0) is updated by One.  And this same approach is used for sensor4 and sensor3.

EEPROM(1) indicates the status of gate, when value of EEPROM (1) is One gate is opened and when EEPROM(1) is Zero gate is closed

Now in line 65 an if loop is used, it become true when value of EEPROM (1) is One now servo rotate from zero to 90 degree and gate opened. “digitalWrite” function is used to make buzzer On and OFF in line 70 and 72. After all EEPROM (0) is updated to zero. This same approach is used for closing the gate.