I just happened to see some large strips of LED lighting when I was picking up some parts at Maplin which were on sale (if I remember correct they were around £12 per approx. 2m strip) however the controller/driver was still around £40, so I thought I would just build a better one myself.
I wanted it to be a web enabled controller as there are a lot of cool things that can be done with a device once it is accessible over HTTP, and I am working on a home automation server project so it would be good to have some devices which I can test this with. 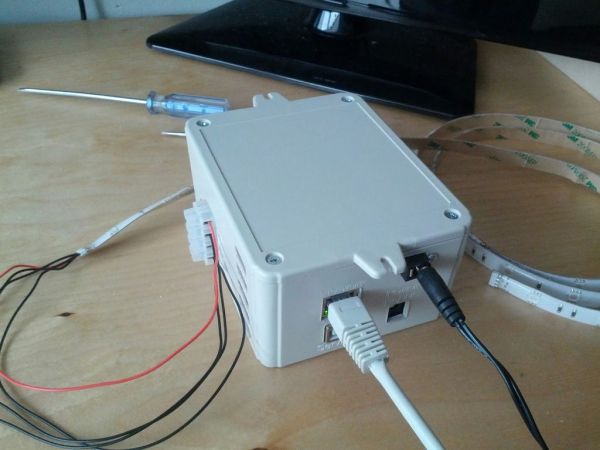 Anyway, let’s get started, here is a basic parts list, some of the components may change depending on the nature of your lighting installation (i.e. if you are driving more LEDs you may need higher power transistors, etc.):

Tools I used which would help:

All the code for this project is available at this GitHub repo. 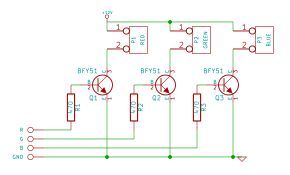 NOTE: Please read the next two steps before starting any work mentioned here, I had to do some modification to my original shield because of power issues, they are described on the next step.

Here you will want to build the driver circuit depicted in the schematic below, this can be done in the same way I did it and made into a shield to stack on top of the Arduino and Ethernet shield, or can be a separate board, either way will work, but I don’t see any advantage to not making it as a shield.

Some minor points, you will want to have three power cables coming from your shield:

The reason for this is explained in the next step.

There are some good guides to building a shield from scratch using stripboard on YouTube, alternatively you could use a (semi) pre-built prototyping shield.

By this time you should have your driver board or shield made, the next step is to test it over a long period of time (a couple of hours in my case) to make sure it is both working properly and efficiently.

I mention efficiency because as you can tell by the image below I am supplying the Arduino with 12v via it’s on board barrel jack and using this to drive the LEDs via the Vin pin on the Arduino, this means that the Arduino must convert 12v to 5v via it’s linear converter, which got very hot after an hour or so.

As a result of this I decided to use a switchmode  DC-DC converter to step the 12v down to 5v for the Arduino and supplied it via the 5v pin. completely bypassing the Arduino’s linear converter, to do this I had to modify my shield slightly to redirect the 12v supply for the LEDs and to add cables going to the 5v and ground pins on the Arduino.

The 12v supply for the LEDs will go directly after the main power switch, ground will go to ground and the 5v will be from the output of the DC-DC converter, in my controller I used an isolated DC-DC converter (i.e. the input ground is isolated from the output ground) as I had them left over from audio electronics, however this is not important for this so a regular 3 terminal converter would also be fine.

I also have a push button which toggles the LEDS between off, full on and the last setting set using the web service, once pushed it will change the lights using the last used (or default if not set) transition and transition time. You do not have to use this button, no changes to the code are needed to disable it, if you do want to use it all it has to do is switch an Arduino pin to ground.

Now to configure the Arduino script and upload it to your board, there are several important changes that may need to be made:

That should be everything, upload that to your Arduino and give it a test by visiting the web UI in your browser.

The template Arduino script can be found in the GitHub repo.