LOG: Made a correction/modification Step 3 and added a picture step 5.

So many Arduino users have RBBBs(Really Bare Bones Board (Arduino))  or Anarduinos or Boarduinos that could use a USB interface to program and power them but don’t want to spend $15-20 for a USB BUB or FTDI cable. This Lazy Old Geek is one of them. 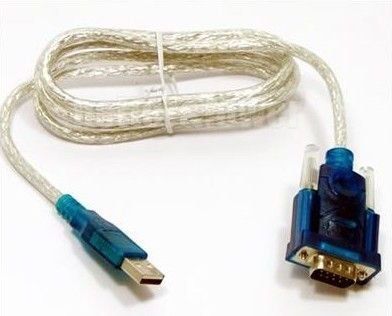 Theory: Most Arduino clones are programmed with a PC using a USB port. Theoretically, they could be programmed with an RS232 port but it is really hard to find a PC with RS232. Some Arduino clones come with a USB converter but most do not. Most require a TTL serial connection. TTL stands for Transistor-transistor-logic which basically means 0-5Vdc logic. So these Arduinos require a USB to TTL converter. One of the more common is the USB-BUB by Modern Devices:

I own one and like it but they’re costly.

So I saw these (see picture) USB to RS232 Serial DB9 Adapter cables on ebay for less than $2 so I bought one. Since I had three weeks to wait for it, I thought about and realized that it probably wouldn’t work as true RS232 has plus and minus 3-15 Vdc signals. The Arduino requires TTL levels which are 0 and 5 Vdc. Nevertheless, I’d already bought it so I took it apart. It apparently had a PL2303 chip in it and I saw no level converters. Anyway, I don’t have any kind of RS232 device to check it with but don’t see how it could ever work with a true RS232. But the other thing is; I couldn’t get it to work with an Arduino. If anyone has gotten one of these to work, please let me know how.