In my previous instructables I described the details of energy monitoring of a off grid solar system.I have also won the 123D circuits competition for that.You can see this ARDUINO ENERGY METER.

Please vote for me…..

In India most of the people are living in rural area where national grid transmission line is not reached till now.The existing electric grids are not capable of supplying the electricity need to those poor renewable energy sources ( photo voltaic panels and wind-generators) are the best option I think. I know better about the pain of village life as I am also from that area.So I designed this DIY solar charge controller to help others as well as for my home.You can’t believe, my home made solar lighting system helps a lot during the recent Cyclone Phailin.

Solar power have the advantage of being less maintenance and pollution free but their main drawbacks is high fabrication cost, low energy conversion efficiency. Since solar panels still have relatively low conversion efficiency, the overall system cost can be reduced using a efficient solar charge controller which can extract the maximum possible power from the panel .

What is a Charge Controller ?

Among the 3 charge controllers MPPT have highest efficiency but it is costly and need complex circuits and algorithm.As a beginner hobbyist like me I think PWM charge controller is best for us which is treated as the first significant advance in solar battery charging.

Pulse Width Modulation (PWM) is the most effective means to achieve constant voltage battery charging by adjusting the duty ratio of the switches ( MOSFET ). In PWM charge controller, the current from the solar panel tapers according to the battery’s condition and recharging needs. When a battery voltage reaches the regulation set point, the PWM algorithm slowly reduces the charging current to avoid heating and gassing of the battery, yet the charging continues to return the maximum amount of energy to the battery in the shortest time. 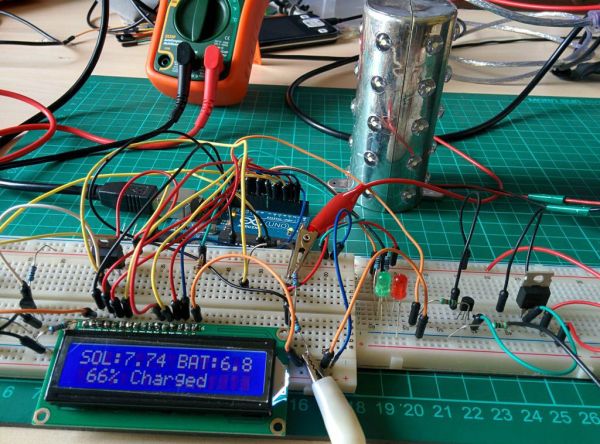 4. Minimizes stress on the battery

5. Ability to desulfate a battery.

I think I have described a lot about the background of the charge controller.let starts to make the controller.

Like my earlier instructables I used ARDUINO as the micro controller which include on-chip PWM and ADC.

The Problem It is late night, and your cellphone rings. You can't see where it is, you blindly grope around...