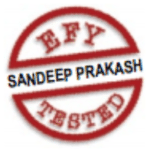 Presented here is an Arduino based audio meter that uses a liquid crystal display (LCD). A VU meter or standard volume indicator (SVI) is a device that displays a representation of signal level in audio equipment. In this project, the intensity of left-channel and right-channel audio signals provided as input to Arduino UNO board is displayed as bars on the 16×2 LCD. In this circuit, analogue input pins of Arduino UNO board are used for measurement of audio-signal levels.

Audio-signal inputs are provided at analogue input pins A2 and A4 of Arduino UNO board. These can be in the form of voice coming from a microphone through an amplifier or as direct output from a music player.

Audio signals at pins A2 and A4 are processed by ATmega328 microcontroller (MCU) on Arduino UNO board and, after comparing the signals, calculations are done.

Finally, corresponding values are provided by ATmega328 to a 16×2 LCD for displaying audio intensity bars.

The Arduino based audio meter, as shown in Fig. 1, is built around Arduino UNO board, 16×2 LCD and 10-kilo-ohm potentiometer (or potmeter).

Arduino UNO is an open source electronics prototyping platform based on flexible, easy-to-use hardware and software. Arduino UNO board is based on ATmega328 MCU. It has 14 digital input/output (I/O) pins of which six can be used as pulse width modulated (PWM) outputs, six analogue inputs, 16MHz ceramic resonator, USB connection, power jack, reset button and an ICSP header. It contains everything needed to support the MCU; simply connect it to a computer using a USB cable, or power it with an AC-to-DC adaptor or a battery to get started.

LCD JHD162A is a display module with a 4-bit interface, which is used here to display the bars corresponding to the applied input signal level. Only four data pins of the LCD module are being used in this circuit. A potmeter of 10-kilo-ohm is used to control the contrast of the LCD screen display. 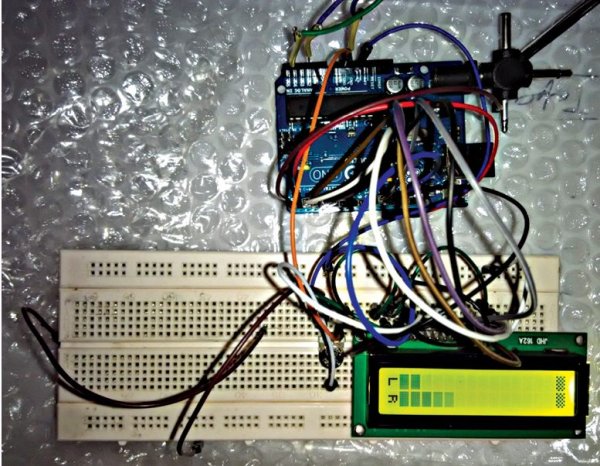 Author prototype of the Arduino based audiometer: Left and right bars displayed on the LCD


Analogue audio signals (left-channel and right-channel) are provided at analog input pins A4 and A2 of Arduino UNO board. The signals are processed by ATmega328 MCU on Arduino UNO board and, after performing some comparisons, data is sent to the LCD screen to display the corresponding signal level bars.

To display bars on the LCD screen, custom characters are created for the 16×2 LCD, which is explained in the programming section. The potmeter is used for controlling the contrast of the display and, so, can be varied as per requirement.

The program for this circuit performs the following functions:
1. Initialising the circuit and LCD
2. Displaying the welcome message on the LCD
3. Generating custom characters
4. Performing various comparisons with input signal voltage at analog input pins
5. Displaying bars and changing their respective heights on the LCD according to the input signals
The program uses special characters for bar-height display on both rows of the LCD using arrays p3, p4, p5, p6 and p7, and arrays L[8] and R[8] for displaying letters L and R on the 16×2 LCD’s starting columns of both rows, respectively.

lcd.begin(16, 2) function is used to indicate the size of the LCD.

lcd.createChar(1, p3) function is used to define custom characters for further calling in the program by number only.

LCD.print(“VU METER”) function is used to display the VU meter as a welcome message.

void loop() function is used to perform the task for infinite time.

Simple calculations are performed to get the values for displaying the bar heights as per audio-input signals.

A USB A-B cable is used to upload the compiled sketch (software) from the PC to the MCU through Arduino IDE.

THE SAMPLER THAT FITS IN YOUR POCKET

The future of the music instrument industry lies in synthesizers, and nowhere is this more apparent than the suite of...