A few months back I started playing around with Arduino micro controllers as a learning exercise (and for fun); this project is the culmination of that. The goal of the project was to create a vehicle that can autonomously navigate through a series of waypoints (GPS coordinates) while avoiding any obstacles it encounters along the way.

The project uses an assortment of electronic sensors and components, and pulled together the knowledge I had learned and synthesized from many sources along the way.

In the attached video you can see a short clip of the car on its way, in this run it navigated through five GPS waypoints on a course on my neighborhood streets totaling about 300 meters. 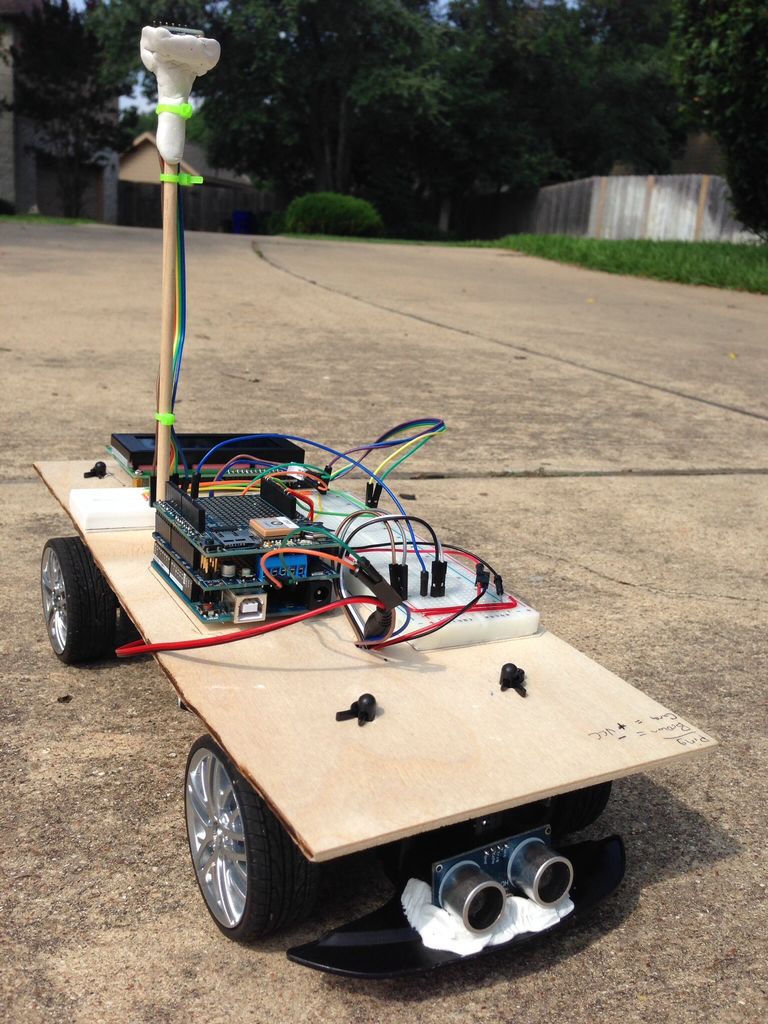 The main components were the following:

Additionally, the project used the following smaller components and accessories:

The following tools were used:

The rough project cost is around $120 – 150 depending on what components you may already have.

A note on project cost: other than the mounting board, almost all of the other components are re-usable; either things you already have that you can use for this project, or things that we can eventually disassemble from this project and re-use elsewhere.

I had seen posts on the internet about hacking inexpensive radio controlled (RC) cars and directly connecting an Arduino to the existing circuit board. I happened to have such a car around that my 3 year old no longer played with; it was a $15 Wal-Mart RC car.

Unfortunately, my early soldering skills left a lot to be desired and I burned through a couple the delicate surface mount components, so I ended up with a partially functioning vehicle.

Plan B: I ripped out the car’s entire control board and purchased an Adafruit Motor Shield (v2). Problem solved. Now I had full control over the vehicle’s motors…though they were pretty basic.

The car was controlled by two DC motors: one controlled the drive, and using the pulse wave modulation (PWM) of the motor controller I was able to control the speed across a range of speeds; the other controlled the steering. This inexpensive RC car did not have proportional steering; the left and right wheels are joined, and there is a spring in the middle that holds the wheels in neutral (center) position when the DC motor is not engaged. When the motor is engaged, it goes to a full/hard turn left or right. That allowed me to turn the vehicle, but provides limitations later when I want more sophisticated navigation. For a future enhancement I will try to replace the DC motor with a servo for full proportional steering control.

I used a thin board as a mounting surface on which I attached the breadboards, Arduino, LCD, etc. I placed the battery supplies beneath the board and passed the cables through holes I drilled.

In the first photo above, you see (1) the LCD, (2) the main breadboard, (3) the small breadboard for the magnetometer, (4) the Arduino (you are seeing the GPS Shield as you look down), and (5) the magnetometer sitting up high on its pole mounted perch.

The Arduino is controlled through a C++ program (“sketch”). The main action happens in the Arduino sketch loop() function which runs repeatedly. The basic program control logic is:

The code to handle each of these is in separate functions.

The LCD provides invaluable insight what the vehicle is doing, critical for debugging and tuning the code. It also looks cool!

While running, the main screen shows the following information:

1. tH = Target Heading, the course to the current waypoint;

2. cH = Current Heading, the direction the vehicle is actually facing

4. Dist = Distance (meters) to the current waypoint; you will notice the small inline bar graph showing the remaining distance to this waypoint.

5. Snr = Sonar distance, i.e. the distance to any objects in front of the vehicle. Also has an line bar graph from 0 to the maximum detectable distance;

7. Mem = Memory (in bytes) of free memory; the Arduino Uno only has 2k so I had to watch this closely;

8. WPT n OF x; shows where the vehicle is in the list of waypoints. 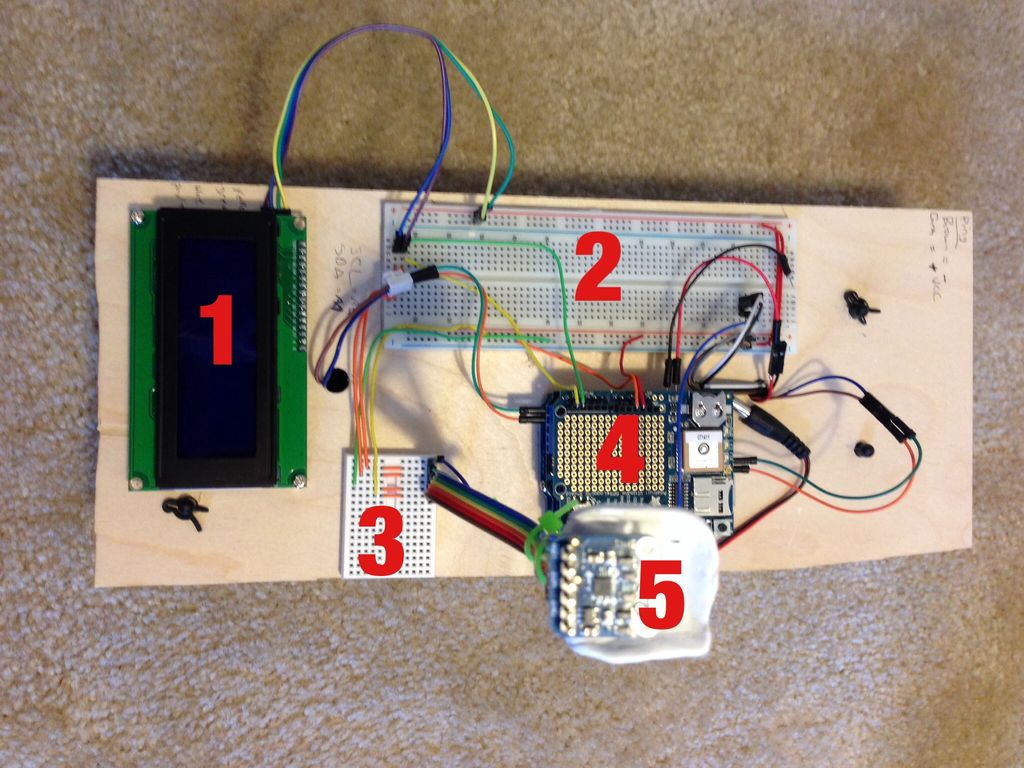 To drive autonomously, the vehicle needs to be able to check for and avoid obstacles it encounters as it drives. I handle this with a “ping” ultrasonic sensor and some computer logic.

The sensor is a basic ultrasonic sensor. I combined that with the Arduino NewPing library, which is a big improvement over the original Ping library (among other things, it only requires a single shared pin for both send & receive).

The sensor is pretty basic, and has a very narrow field of view. For this project, I am only using a single sensor with a fixed position (not a sweeping “radar” type implementation).

I mounted the sensor to the front bumper of the vehicle with some Surgu. This was my first time using the product, and it works very well. I only used a single 3.5g packet, and that was sufficient for this purpose.

The sensor has a tendency to return the occasional odd or random value…not sure why. In his excellent series of articles, Miguel Grinberg offers a simple solution: use a moving average. I adopted his MovingAverage class to the project with good results.

The checkSonar() routine continually takes new measurements, adding each new measurement to the moving average; the average is then used for program logic.

If an object is detected, the following logic is applied:

Once we have a clear path ahead, normal navigation resumes.