Hi folks! Last few days I’ve been obsessed with the idea to make my own watch from arduino parts, but something cool I could use and say I did it myself. So I found out there was a sensor board (commonly named GY-87) which had three sensors on it: HMC5883L (compass), BMP085 (pressure, altitude, temperature) and MPU6050 (accelerometer and gyroscope). With it, via I2C, I could add an Arduino Pro Mini, and an I2C Oled Display and make a watch capable of having all this information, plus a pedometer (by analysing accelerometer data).

Cool enough, it was incredibly easy to make, and you will just need some cheap parts, a small amount of Eagle PCB knowledge, some skill on making your own PCB board, and preferably a cheap watch to unmount and get the bracelet / carcass.

Before start, I’ll just post some pictures of previous versions I made so you can have an idea of the challenges you’ll face, and stuff you can add if you like. Let’s get going! 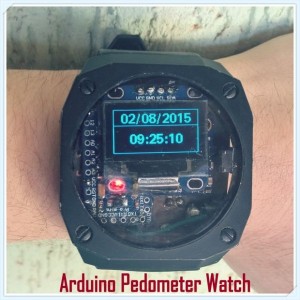 Observation: forgive me if my english is not good enough, this is not my native language, for I am brazilian. XD

There were two previous versions of the watch. The first one was an attempt to put compass and bluetooth together. It succeeded. The watch was small in size, but too thick. The first three images are it. It could communicate with my Windows Phone via bluetooth, get automatically the time and date, and also my next calendar appointments and display them. It was also sending many times per second the current compass position, and the phone would display it. Yeah, I had to make the WP app. I think I have it here, so I’ll post it with the instructable. However there were some problems with the Project:

The heart rate, also referred to as pulse rate, has been recognized as a vital sign since the beginning of...