Seven segment LED displays are known to be resource and power hungry. But because they are visually so charming and readable from a far viewing distance and at a much wider viewing angle as compared to any other electronic displays, they are still hugely popular. The required number of I/O pins to drive the LED segments can be reduced significantly by using an additional dedicated hardware.

This project uses the MAX7219 device on the input side to receive the display data from a host microcontroller through an SPI interface. The MAX7219 outputs cannot drive LED segments with forward-voltage above 5V. Therefore, an additional circuit is required to translate the TTL output levels of MAX7219 into appropriate high voltage signals required to operate the large seven segment LED modules. To illustrate I am using eight 5″ displays which require about 14V to drive segments ‘a’ through ‘g’ (each consists of two rows of 7 standard LEDs), and 6V to drive the DP segment (consists of 3 LEDs). The following figure shows the arrangement of multiple LEDs inside the display segments of the 5″ seven segment module I am using. 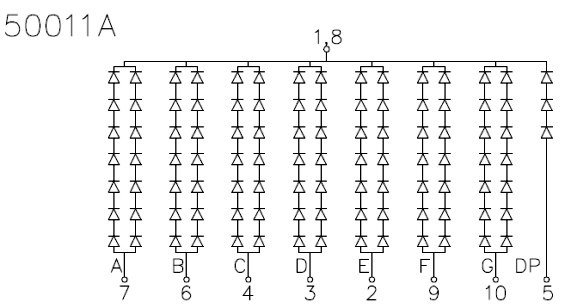 The following block diagram explains the overall functionality of the board. The power supply unit provides a regulated +5V to power the logic chips, and a variable high voltage (HV) required to drive the LED segments. The value of HV can be adjusted as needed through a potentiometer. On the input side is MAX7219 chip which receives display data from a host microcontroller through a serial interface. In order to find more detail about the MAX7219 interface, visit MAX7219 based seven segment LED display. The output segment driver pins of MAX7219 are translated to high voltage signal lines using UDN2981A, which is a 8-channel source driver. In order to prevent the DIG0-DIG7 sink outputs of MAX7219 from any possible damage (or malfunctioning) due to high voltage signals applied to LED segments, external sink lines are created using ULN2803. Since the DIG0-DIG7 lines of MAX7219 are active low and ULN2803 inputs are active high, an eight channel logic inverter (74HC540) is used in between to make the two sets of signal lines compatible. Imagine a situation when outputs of UDN2981A (which is set by varying HV) is higher than the forward voltage of LED segments by more than 5V. If DIG0-DIG7 sinks are used directly without the arrangement discussed above, then no matter what is the output state of DIG0-DIG7, the LED segments will always be on. So the use of 74HC540 and ULN2803 as external sinks prevents this malfunctioning.

Hi folks! Last few days I've been obsessed with the idea to make my own watch from arduino parts, but...