Morse code was the breakthrough that made possible long-distance
communication in the era of the telegraph. The code represents
alphanumeric characters by short and long intervals of signal — those
familiar dots and dashes. For many years passing a Morse code test was a
prerequisite of getting a Ham license, but nowadays most radio amateurs
use it only infrequently. No longer are ship-to-ship distress signals
sent in Morse, as was the famous CQD (dah-dit-dah-dit dah-dah-dit-dah
dah-dit-dit) transmitted by the sinking Titanic’s radio operator in 1912.
Still, Morse remains important for signalling distress,  if only by a lost
hiker blinking a flashlight into the lonely, dark night. 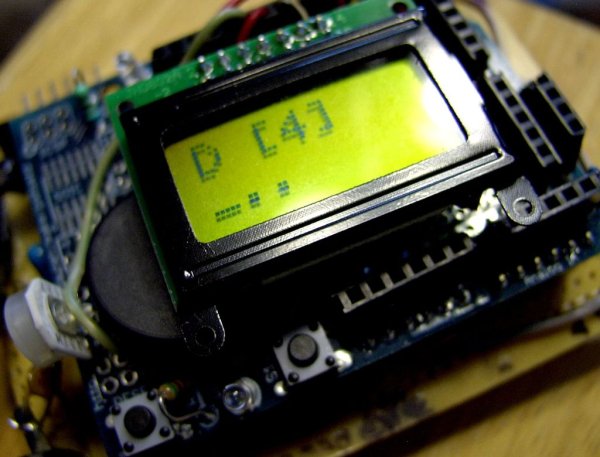 Hacking the Arduino as a Morse code trainer is fairly straightforward.
All you need is a blinking light, such as a high-intensity LED, and a sound
source, say a mini piezo speaker, to provide the beeps. Rounding out
the project is an LCD display to show the character being beeped/blinked.

The goal is to beep and simultaneously display the letters, numbers,
and a few important punctuation marks in ordered sequence. Following
this, do 50 random letters. Then, have the entire routine repeat.
The combination of beeps, flashes, and LCD display serves as an
effective tool for memorizing the Morse code.

I built this project as an Arduino shield, using an Adafruit protoshield
blank board. It will likewise work with most of the commercially pre-built
16×2 LCD shields or even just breadboarded. The hardware consists of
an 8×2 or 16×2 LCD wired to the Arduino in conventional fashion, an LED,
and a piezo speaker. Most of the actual work is done by software.

I used point-to-point wiring, otherwise known as “haywiring,” a
venerable technique lost in the mists of antiquity. Before the mid 1950s,
virtually all electronic devices were built this way, and by humans,
not robots or automatic devices.

The illustration depicts the project built on a Sparkfun protoshield.
An Adafruit or equivalent board works just as well. Even a
general-purpose prototyping project board is fine, though it might
be a bit tricky to get the headers aligned just right.

You can even build the project on a wireless breadboard. 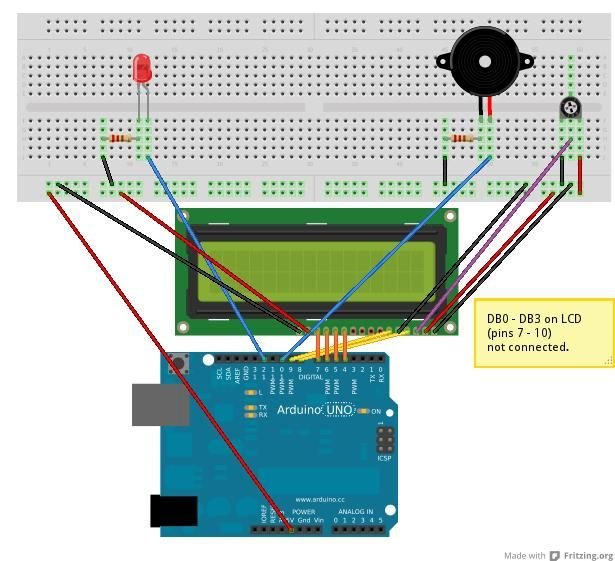 Note that the current-limiting resistor on the LED is 220 ohms, and the
one on the piezo speaker is 47 ohms. The LED needs that resistor, or it
will burn out. The speaker may or may not need one, but it’s better to be
safe.

What you’ll need to build it

blank protoshield board (Adafruit and Sparkfun sell nice ones)
8×2 LCD, type JHD802A-2 (the kind with no backlight preferred)
[This project will work just as well with a 16×2 LCD,
with one change on line 105 of the sketch.)
1 high-intensity LED
(Doesn’t need to be the ultra-bright variety.
A “clear” LED works just fine.)
1 cheap piezo beeper
(All Electronics sells a plastic-encased one for $1.50,
which is nice and loud and non-polarized. Catalog # SBZ-26.)
1 220 ohm resistor
1 47 ohm resistor

With this device you’ll be able to: take pictures from anything you can sense or detect: - movement - sound...