In this project, we will go over how to connect an analog volt panel meter to an arduino so that it can measure and give us a readout of light striking the circuit. 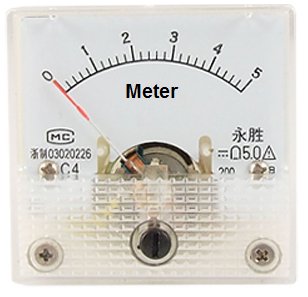 In this way, the circuit will function as a light meter.
When there is a lot of light shining on the circuit, the meter will deflect greatly. When there is a low level of light hitting the circuit, the meter needle will barely deflect. In this way, we have a device that deflects based on the light level hitting it.
The type of analog panel meter we will use is really generic. Light is usually measured in unit lumens, lux, or candela. However, it will be very difficult to find an panel meter that is calibrated in terms of lumens, lux, or candela. So a generic panel meter can be used that is calibrated in volts. If the circuit is set up properly, the idea is that you can still see how much the needle swings in proportion to changes in light, even if an exact value can’t be read. If the needle barely moves at all, it is exposed to either darkness or very small amount of light. If the needle swings about midway, it’s exposed to a decent level of light. If the needle swings all the way left, bright light is being shone on it.
This way, we can demonstrate how to build a light meter.
For this circuit to work, the component that will be used to detect and measure the amount of light is a photoresistor. A photoresistor is a type of special resistor whose resistance changes in proportion to the amount of light exposed to it. When exposed to darkness, it offers a great amount of resistance. Depending on the type, it can be megohms of resistance. When exposed to bright light, its resistance drops drastically. Again, depending on the type it may fall below 30KΩ. We will build a voltage divider circuit so that we place a photoresistor in series with a fixed resistor. Since the photoresistor changes its resistance in response to light and changed resistance incurs changed voltage, we can measure the amount of voltage the photoresistor has and know whether it is exposed to a bright light (low resistance) or darkness (high resistance). If the photoresistor is exposed to darkness, it will have a very high resistance. Thus, in a voltage divider circuit, most of the voltage will fall across the photoresistor and not the fixed resistor. Thus, we will write our code so that under this condition, the needle does not deflect much. If the photoresistor is exposed to bright light, it will have very low resistance, much less than that of the fixed resistor. Thus, most of the voltage will fall across the fixed resistor and very little across the photoresistor. Under this condition, we write our code so that the needle deflects far right.

The arduino light meter circuit we will build is shown below. 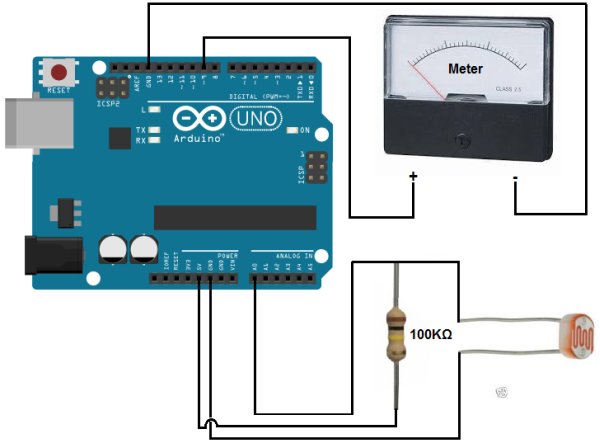 The circuit connections are pretty straightforward and basic.
When connecting the analog volt panel meter to the arduino, we connect one terminal to D9 of the arduino and the other terminal to ground (GND).
For more detail: Arduino Light Meter Circuit

Hello everyone ! Please vote for me in the tech contest! In this instructable I am collaborating with Akin Yildiz...