Update 11/22/2013: Thanks to everyone who voted for this project in theMicrocontroller Contest! It was one of three first-prize winners. 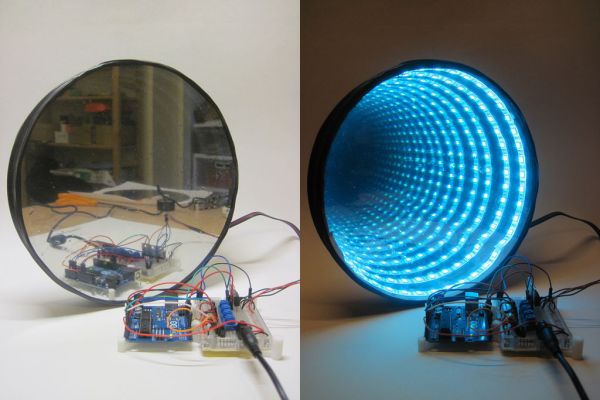 Update 9/17/2013: Thanks to everyone who voted for this project in the Arduino contest (I was one of ten “second prize” winners)! If you want to try this project with an addressable LED strip instead of an analog strip, check out the Rainbow Jarproject (also an Arduino contest winner).

This is my take on a combination of two classic projects: RGB LED control with an Arduino, and an Infinity Mirror. It’s an RGB LED infinity mirror that lets you toggle between an adjustable-speed color-fade mode and a direct-control mode where you individually set the red, green, and blue LED brightness levels. The primary inspiration for this particular project comes from this infinity mirror Instructable andAdafruit’s RGB LED Strip tutorial, but there are many more quality resources out there on both projects.

I’ve done my best to gear this project towards newbies by providing an exact list of materials I used and the exact procedure that I followed. One recurring theme I’ve noticed in comment sections for other infinity mirrors is a lack of links to specific parts (e.g. exactly what type of LEDs or LED strips were used, what power supply, where to buy the mirrors, the enclosure…). Clearly, if you know what you’re doing and want to spend more (or less) money to design a slightly different mirror, you can adjust your materials as needed, use a different Arduino board, etc. You can skip the Arduino entirely and make a pretty simple, cheap infinity mirror if you want (just search Instructables for “infinity mirror” and you’ll find a few), or go crazy and spend hundreds if not thousands of dollars (search YouTube for “infinity mirror table” and you’ll get the idea).

So, on to the materials list. Remember that this is an exact list of parts that I used, but I gradually cobbled together the supplies for this project over a long period of time. I didn’t sit down, compare vendors (e.g. Adafruit vs. Sparkfun) and find the absolute cheapest way to build this. So, feel free to shop around to bring down the cost (and post links in the comments if you find a better/cheaper version of a certain part!). Quantities are just 1 (one) unless otherwise noted, prices are rounded to the nearest dollar as of September 2013.
Materials: Electronics

Important: there are three main parts that need to fit together to build this: the regular mirror, the frame, and the one-way mirror. First, it’s easiest if you can find a cardboard/paper mache lid and a regular mirror that will fit snugly inside it  – the parts I bought didn’t fit together perfectly, so I had to use a workaround (see Step 6). Second, cutting acrylic can be a pain depending on the tools you have available, so plan accordingly (see Steps 9 and 10). There’s also an important consideration regarding the LED strip, which can’t be cut to any length – it has to be cut in multiples of 3-LED segments, which are just shy of 2″ long – so you want the inside perimeter of your mirror frame to be a multiple of that length. So, I’ll link to the parts I used to build my mirror, but you can still follow these directions to build a mirror of a different size or shape.

Got all that? Time to start building!

Step 1: How does an infinity mirror work? 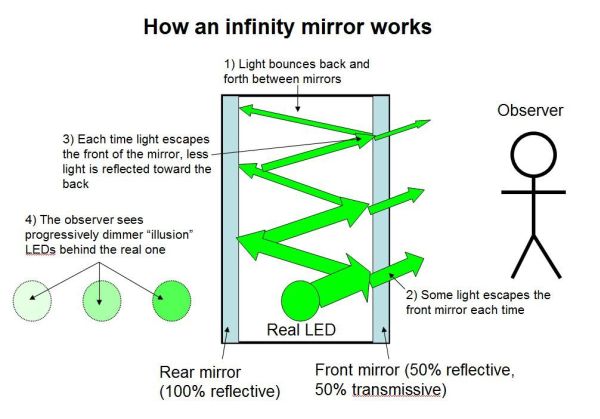 Ok, almost time to start building. First, I want to pre-emptively address another common comment: how do these things actually work?

Not surprisingly, there is no magic involved. The secret is that the infinity mirror actually contains two mirrors with different  transmissivity and reflectivity. For all practical intents and purposes, mirrors that we deal with in everyday life are 100% reflective (technically a tiny amount of light will also be absorbed, but we can ignore that for now). That’s the regular mirror at the “back” of the infinity mirror (on the left in the diagram above). The tinted window film, however (on the right in the diagram above), only reflects about half of the light that hits it*. This means that, when you sandwich an LED between the two mirrors, some of the light escapes through the front mirror and into your eye. The rest is bounced back off the rear mirror, then into the front mirror again, and this process continues off to infinity – thus the name. But, since a little bit of light escapes each time, each successive illusionary LED that you see will look a little bit dimmer, until they gradually disappear – you can’t actually see infinitely many LEDs.

Note that this does not work because the window tint “only lets light through in one direction”, which is a common misconception. In order for the illusion to work properly, the side of the front mirror the observer is on (the outside world) must be much darker than the side with the LEDs (inside the infinity mirror). This is the same effect that you see in crime dramas/movies where someone is held in an interrogation room that has a mirror on the wall, but there are people on the other side of that mirror observing as though it’s just a window. That only works if the interrogation room is well-lit and the observation room is dark.

It’s probably a good idea to build, test, and debug your circuit before you build the mirror. Otherwise, it would be quite sad if you get a nice, fancy mirror built only to throw the switch and find out something doesn’t work. So, first let’s assemble the circuit and test the LED strip. If you’re new to circuits and don’t understand what’s going on, you can either (a) just blindly follow the directions, or (b) look ahead to the next step for an explanation of how the circuit works.

If you have experience working with breadboards, you can go ahead and assemble the circuit based on the third breadboard diagram above, or directly from the circuit diagram. For newbies I broke it into three steps, hopefully to make things less overwhelming – corresponding to the first three diagrams above:

1) Populate the breadboard with the three MOSFETs, four potentiometers, SPDT switch, and barrel jack adapter. I made these parts “transparent” in the figure above so you can see exactly where their pins go*.

2) Add wires to connect to your power and ground rails. I’ve color-coded these with red and black here, but remember that you can use whatever colors you want if you just have a multi-colored jumper wire kit and no red and black hookup wire. Notice how one of the breadboard rails is connected to the +12V supply from the barrel jack (which feeds power to the Arduino through Vin), and one is connected to the Arduino’s +5V power pin, but they share a common ground. Whatever else you do, don’t short the +12V and +5V supplies together!

3) Add wires to connect to the Arduino’s inputs and outputs, and wires that you will connect to your LED strip (if your strip came with pre-soldered wires, use those)**. Again, I’ve color-coded the respective red, green, and blue wires here but your ability to do that will depend on what wire you have available.

* I started making this diagram in Fritzing, but got frustrated with the enormous amount of space components like MOSFETs and potentiometers take up in breadboard view mode (they give a quasi-3D view instead of a “top-down” view, so take up way more space than they do in real life and obscure other things on the breadboard). So, I took a screenshot of the Arduino and breadboard and drew over them in Powerpoint.

** If your LED strip did come with pre-soldered wires, be careful about the color coding. SparkFun’s product page notes that the blue and green wires are switched, which can be irritating but won’t cause any harm. My strip came with a black wire connected to V+, and getting the polarity reversed on the LED strip could be bad news. I guess I understand not wanting to use two red wires (one for V+ and one for the red LEDs) but I wish they’d use something other than black for V+.

Step 3: How Does the Circuit Work?

This is a rough explanation of how the circuit works and what the components are for. Seasoned veterans can skip this step, but read on if you’re curious. I don’t have time to write a whole introductory chapter on circuits so I’ve tried to provide relevant links when possible.

Copy and paste the Arduino code below into a new sketch. I won’t write my own tutorial here, so if you don’t know how to create/upload a sketch, check out the official Arduino – Getting Started page. If you want to learn more about a specific command, just Google it (e.g. “Arduino analogWrite”) and the official help page should pop right up.

Caveat: this probably isn’t the most efficient code! Particularly, I’m not sure of a nicer way to continuously monitor the fade-speed potentiometer without copying and pasting the same line of code over and over, or if there’s a way to break out of a for loop if you flip the toggle switch (right now, if you switch to individual-control mode while in color-fade mode, the switch won’t occur until it finishes the current fade cycle). So, I’ll throw that out there as a challenge to anyone who’s reading this and wants to post better code. Clearly I’m a mechanical engineer at heart and not a programmer.