Like many out there, I enjoy a good exercise session, whether it be indoors or outdoors. As part of that I purchased a Polar branded heart rate monitor, which came with a “Wearlink” chest strap and RS300Xsd receiver watch.
The watch is able to do quite a bit of analysis on its own, in terms of recording heart rate averages, target zones and the like, but without the additional FlowLink device there is no practical way of moving this data to a PC for further manipulation (in any case, the FlowLink device can only synchronise to a website run by Polar).

Having recently started out with the Arduino platform and some simple programming (I can make an LED blink!), a solution seemed obvious, build my own receiver unit and do with the data whatever I please… 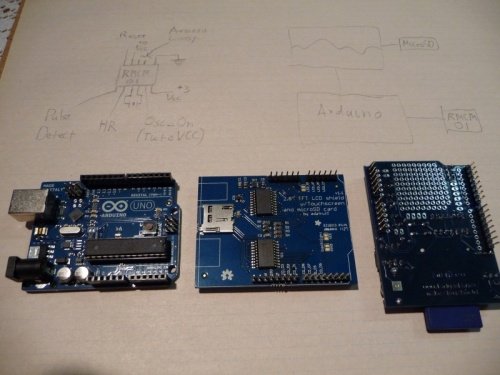 The obvious key requirements of the monitor are:

Ideally it should interface with my existing Polar strap, as I’m not really one for having wires hanging off my chest while exercising.

If possible, I’d also like to add a display of some form to show statistics/heart rate, or some other information, as well as some form of input to change settings on the device without having to reload the sketch.

After a bit of research, it turns out an OEM module is available to interface directly with Polar branded heart rate straps, the RMCM01 module available from Sparkfun.

This module does all the hard work of reception and filtering of the signal (on 5.5kHz), and outputs a 1ms pulse at 3 volts for every heartbeat detected. The module is conveniently small and only requires a 32kHz crystal to provide a clock signal. If required, an additional antenna coil can also be added to the module to boost reception range.

As for the brains of the unit, I decided to work with an Arduino Uno due purely to the simplicity of using pre-existing hardware and code from libraries.

I had a spare Adafruit 2.8″ TFT LCD touchscreen from previous experiments, which conveniently covered the storage, display and input options all in one neat package. This wasn’t without a few drawbacks, as this particular shield uses almost all the available pins on the Uno. I also decided to drop the logger shield I originally planned to use for storage and timing, as it would likely misbehave with the LCD (or at least make me write a lot more code than I wanted to) and could be more profitably used elsewhere. As a result I decided to build a new shield for the RMCM01 module, even though this would leave me without the convenience of an RTC for accurate timing.

I also drew myself a rough block diagram of how things might work, as shown below:

To ensure I got an accurate BPM reading, I connected the RMCM01 output pin to the Arduino’s D2 to allow me to use one of the external interrupts. Using an interrupt meant that I would never miss a single pulse from the module, and I could avoid introducing any delay() lines, which might disrupt or distort time recordings.

The code fired by the interrupt simply measures time between the current pulse and previous pulse recorded in milliseconds, then uses that to calculate a BPM. To avoid too much random variation, the calculated values are kept in rolling buffer of the last five readings and averaged, as shown in the code segments below:

Drawing the graph was a bit more complex, as the TFT LCD module is not really designed as a graphing device. After trying with a line graph, bar chart and scatter plot, I chose the bar chart, as it gave the most visible display of heart rate without drawing crazy averages or being difficult to see due to overlaps. For starters the device draws a single column per pixel width, and has no actual axes (I’m planning to add these in a bit later!).

For convenience of use I also added a simple text display of beats per minute in the top right corner. Each time a column is drawn, the same value displayed is recorded as a line in a CSV file on the microSD card.

To take a peek at the full sketch (this is prone to being updated), please click Here

After building and doing some basic tests on the monitor, I decided to take it for a spin on an actual exercise session. Pretty quickly some obvious flaws became apparent:

My next step is to work out a more practical power supply, most likely a set of suitable of LiPo cells, which would be smaller, flatter and lighter. In any case I already have a good balance charger available!

Additionally, I will need to sort out a way to make the whole set of shields more durable to external shocks and stresses. At this stage a simple enclosure box might work, although a custom enclosure would be more useful for adding straps.

I left spare space on the RMCM01 shield deliberately in case I decided to add an RTC of some form further down the line. Most likely I’ll look at adding a suitable 1wire RTC to an available pin when I get around to it, and rework the sketch to support it. At the same time I’ll probably also add an antenna loop and variable resistor for the RMCM01 module to improve and tweak reception.

The user interface really does still need a lot of work, all it does is draw a rough graph based on BPM as sampled per second. As user input is currently non-existant, this can’t be changed without uploading the sketch with new values defined (inconvenient!) In the future I’m planning to store these values on the SD card, as that will make them readily accessible both through the device and on a PC while copying recorded files.

Suggestions and modifications are welcome! As changes are made I will update this page with my progress…

There are several ways to produce a negative voltage from a positive voltage source, including using a transformer or two...