Measuring the speed/rpm of a Vehicle or a motor has always been a fascinating project to try. In this project, we are going to build a Analog Speedometer using the Arduino. We will use IR Sensor module to measure the speed. There are other ways/sensors for this, like hall sensor to measure speed, but using an IR sensor is easy because IR sensor module is very common device and we can get it easily from the market and also it can be used on any type of motor/Vehicle.

In this project, we are going to show speed in both analog and digital form. By doing this project, we will also enhance our skills in learning Arduino and Stepper motor since this project involves use of Interrupts and Timers. At, the end of this project you will be able to calculate the speed and distances covered by any rotating object and display them on a 16×2 LCD screen in digital format and also on analog meter. So let’s start with this Speedometer and Odometer Circuit with Arduino 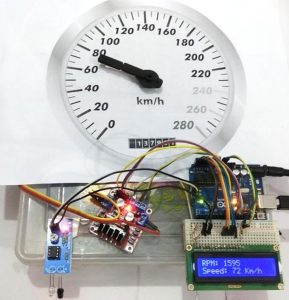 Calculating Speed and Showing it on Analog Speedometer

An IR Sensor is a device which can detect the presence of an object in front of it. We have used two blade rotor (fan) and placed the IR sensor near it in such a way that every time the blades rotate the IR sensor detects it. We then use the help of timers and Interrupts in Arduino to calculate the time taken for one complete rotation of the motor. 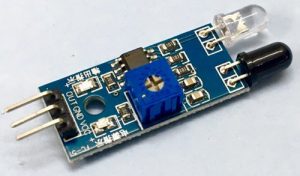 Here in this project, we have used highest priority interrupt to detect rpm and we have configured it in rising mode. So that whenever sensor output goes LOW to High, function RPMCount() will be executed. And as we have used two blade rotor, It means the function will be called 4 times in one revolution.

After getting RPM, speed can be calculated by given formula:

But first we need to convert radius into meters from inches:

Here we have multiplied rpm by 60 to convert rpm to rph (revolution per hour) and divided by 1000 to convert meters/hour to Kilometers/hour.

After having speed in kmh we can show these values directly over the LCD in digital form but to show speed in the analog form we need to do one more calculation to find out no. of steps, stepper motor should move to show speed on analog meter.

Here we have used a 4 wire bipolar stepper motor for analog meter, which is having 1.8 degree means 200 steps per revolution. 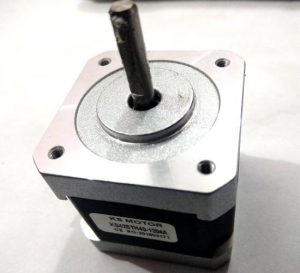 Now we have a function in our Arduino code namely map function which is used here to map speed into steps.

So now we have

here currSteps is current steps that is coming from last calculation and preSteps is last performed steps.

Circuit diagram for this Analog Speedometer is simple, here we have used 16×2 LCD to show speed in digital form and stepper motor to rotate the analog speedometer needle.

16×2 LCD is connected at following analog pins of Arduino.

A 2.2k resistor is used to set the brightness of LCD. An IR sensor module, which is used to detect fan’s blade to calculate the rpm, is connected to interrupt 0 means D2 pin of Arduino. 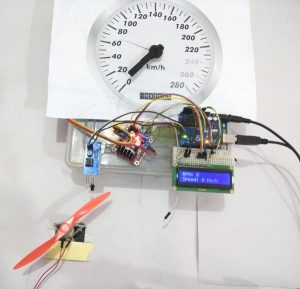 Complete code for Arduino Speedometer is given at the end, here we are explaining few important part of it.

In programming part, we have included all the required libraries like stepper motor library, LiquidCrystal LCD library and declared pins for them.

After this, we have taken some variables and macros for performing the calculations. Calculations are already explained in the previous section.

After this, we initialize the LCD, Serial, interrupt and Stepper motor in the setup function

After this, we read rpm in loop function and perform a calculation to get speed and convert that into steps to run stepper motor to show speed in analog form.

Here we have reapRPM() function to calculate RPM.

There are two things that you don't want to do with any rechargeable battery on a routine basis: Overcharge it....