Face detection and tracking with Arduino and OpenCV 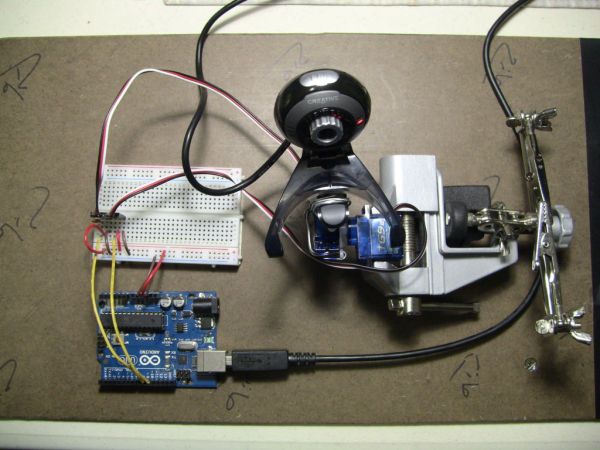 This guide will also be maintained on my blog http://techbitar.blogspot.com/2012/04/face-detection-and-tracking-with.html

In this project I have assembled a face detection and tracking system. You can see the video of the final project here:

Basically, the webcam sends video frames to OpenCV running on a Windows PC. If OpenCV detects a face it will track it and calculate its center’s X,Y coordinates. The coordinates are then passed on to the Arduino via a serial USB connection. The Arduino controls the movement of the webcam with the help of two pan/tilt servos to follow the detected face.

This is an integration project between hardware and software tools. The image processing C++ code samples are provided with the openCV library and all I did was to modify the sample code for this project. I removed some of the unnecessary code and added serial communications to it so it can send X,Y values to Arduino.

This project would not have been possible without the team who developed OpenCV. I also benefited from Ryan Owens’ tutorial (http://www.sparkfun.com/tutorials/304) which is based on Processing, OpenFrameworks, and an earlier version of OpenCV. I tried to install Processing and OpenFrameworks with no luck. So Instead, I opted for Microsoft Visual C++ 2010 Express and the latest version of OpenCV which is 2.3.1 without any middleware or wrappers. 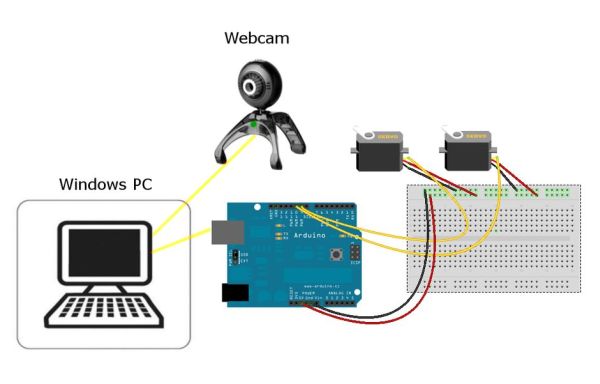 1) Download and install the OpenCV-2.3.1-win-superpack.exe if you don’t wish to deal with generating the support files yourself. Everything you need from OpenCV to build this project has already been generated in this download.

The OpenCV installation documentation explains how to make Visual C++ aware of the OpenCV support files (include, bin, etc). This is not a one-click job. Careful attention must be given to how Visual C++ must be configured to recognize OpenCV files.

The OpenCV team tested version 2.3.1 and Visual C++ 2010 on Windows 7 SP1.  If you are using a different configuration, be prepared for a few hiccups.

For more detail: Face detection and tracking with Arduino and OpenCV