For the first time in history, a prototype radio has been created that is claimed to be completely digital, generating high-frequency radio waves purely through the use of integrated circuits and a set of patented algorithms without using conventional analog radio circuits in any way whatsoever. This breakthrough technology promises to vastly improve the wireless communications capabilities of everything from 5G mobile technology to the multitude devices aimed at supporting the Internet of Things (IoT).

The significance of this new technology cannot be overstated: Every aspect of radio frequency generation is said to be created using a string of digital bits, and nothing else. There are no analog circuits, no filters, no chokes, none of the traditional circuitry and components expected in a radio transmitter. Consisting of a mere handful of components, including a couple of integrated circuits, an antenna, and not much else, the transmitter – dubbed Pizzicato – promises to change the face of wireless transmission. 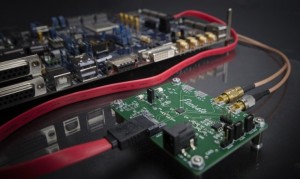 Created by Cambridge Consultants, the initial trials of the Pizzicato have been claimed to show that it has fully met all the expectations of its myriad performance requirements. But more than this, the Pizzicato has brought bulky radio circuits down to microprocessor levels, with the promise of even smaller, more efficient uses of the technology in future.

“Our first trial of the technology has created 14 simultaneous cellular base station signals,” said Monty Barlow, director of wireless technology at Cambridge Consultants. “But it is the potential which is so exciting. Like mainstream microprocessing, a Pizzicato-based radio would directly benefit from Moore’s Law – shrinking in cost, size and power consumption with each new generation of silicon fabrication.”

In recent years, as ever more users move on to mobile broadband and devices bound for the IoT come on line, electronics designers have sought ever greater improvements in the data rates that can be jammed into channels on the wireless spectrum. However, the limits of what can be achieved using analog circuits or even the more advanced analog-digital amalgams used in software-defined radio (SDR) are rapidly approaching their useful limits.

With the WIZ550WEB module you´re immediately on the web

To administrate devices through a web interface is simple, fast and comfortable. Also can be added, that it´s a solution...