While the stench of rotting food would cause you to stop from chowing down, chances are it became unfit for consumption some time before those funky aromas wafted through your nostrils. Chemists at MIT have been working on a wireless, inexpensive sensor that, among other things, identifies spoiled food early by detecting gases in the air. It then shares its data with a smartphone, potentially alerting users to that soon-to-be moldy fruit in the bottom of the fridge. 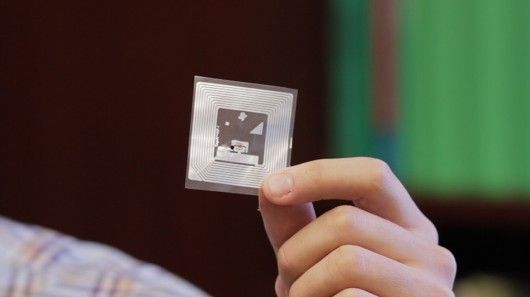 “The beauty of these sensors is that they are really cheap,” says Timothy Swager, Professor of Chemistry at MIT. “You put them up, they sit there, and then you come around and read them. There’s no wiring involved. There’s no power. You can get quite imaginative as to what you might want to do with a technology like this.”

Swager has something of a history in developing gas-detecting sensors. In 2007, his amplified chemical sensors designed to detect vapors from explosives such as TNT saw him awarded the prestigious US$500,000 Lemelson-MIT Prize. In 2012 he produced ethylene sensors to gauge the ripeness of fruit, a tool that could help grocers arrange their stock to minimize waste and maximize sales of fresh produce. His latest creation could be seen as a culmination of these earlier achievements.

The new sensors are modified near-field communication (NFC) tags, which are often used as proximity sensors. The team punched a whole in the tag’s electronic circuit and then replaced the missing link with carbon nanotubes designed to detect particular gases. The nanotubes were drawn on using mechanical pencils, which were also developed in Swager’s lab back in 2012.

For more detail: Wireless sensor alerts your smartphone as food begins to spoil