A while back I built a simple constant current electronic load using an aluminum HDD cooler case as the heatsink. While it was sufficient for a few amps’ load under low voltages, it could not handle load much higher than a few dozen watts at least not for a prolonged period of time. So this time around, I decided to build a much beefier electronic load so it could be used in more demanding situations.

One of the features a lot of commercial electronic loads has in common is the ability to sink constant power. Constant power would come in handy when measuring battery capacities (Wh) or testing power supplies for instance. To accommodate this, I decided to use an Arduino (ATmega328p) microcontroller.

The schematic below shows this electronic load design. To make the schematic less cluttered, I had deliberately omitted the filtering capacitors and decoupling capacitors. I also omitted the microcontroller circuitry as it is rather standard. All the connections to the standard Arduino board are clearly marked for easy references. The Arduino source code can be downloaded towards the end. 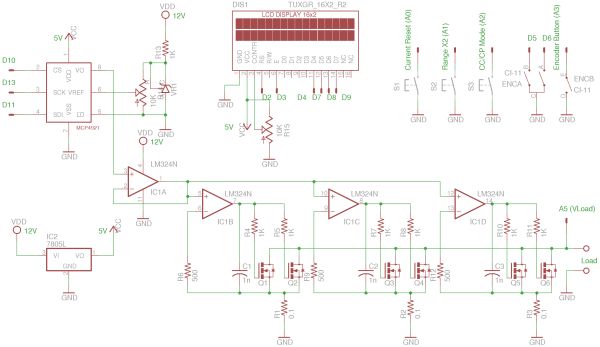 At a first glance, the circuit here seems a lot more complicated than the simple one I built before. But the core power stage portion is actually quite similar.

I used 6 IRFP150N‘s to handle the load. These 6 MOSFETs’ are divided into three groups: each group consists of two MOSFETs paralleled together with independent gate driving resistors. The three pairs are then driven independently via three Op Amps. This design ensures equal distribution of the load current among these three groups of MOSFETs. With this configuration, the maximum power this electronic load can dissipate is at least 200 Watts for a conservative estimate.

In the circuit above, IC1A forms a voltage follower, which buffers the DAC output and the inputs of the three driving Op Amps. An LM324 is used here for the four Op Amps. Of course, the choice of the OpAmps here is not critical and you can substitute with pretty much any general purpose ones. The DAC I used is Mcirochip’s MCP4921. MCP4921 is similar to MCP4821 which I used before. The main difference is that MCP4921 uses an external references whereas MCP4821 has a built-in 2.048V reference. This is also the main reason I chose MCP4921. By varying the external reference voltage, we can strike a balance between the maximum current allowed by the electronic load and the current adjustment resolution.

An encoder is used for current adjustment. By default, the current can be adjusted at a resolution of approximately 1mA/step. By pressing the encoder button, this resolution can be changed to 10mA/step and 100mA/step respectively. This makes it easier to to coarse adjustments.

Constant power mode is achieved by calculating the desired set current via the measured load voltage.

Here are some pictures showing the construction of this electronic load. The heatsink I used is a huge piece of aluminum block I got at a local auction. The original owner builds audio equipment and he used these heatsinks for his class A amplifiers. Anyway, the size of the heatsink is probably an overkill, but it certainly works nicely even without forced air cooling.

Wireless sensor alerts your smartphone as food begins to spoil

While the stench of rotting food would cause you to stop from chowing down, chances are it became unfit for...