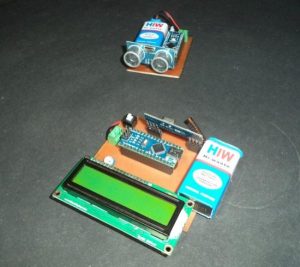 In the project two circuits are used, First is the transmitter and second is the receiver. An Ultrasonic sensor is used in the transmitter circuit, which measures the distance of water level from the upper point of the bottle or Tank. The distance is measured in centimeters and sent to receiver circuit using RF communication.

Receiver circuit receives the data from transmitter circuit and converts it in terms of the percentage and shows on LCD.

Ultrasonic sensor has two openings, one is Trigger and the other is Echo. Trigger makes high frequency sound waves. These sound waves are passed through the tank from top to bottom. The sound waves hit the water and are reflected back in the form of Echo waves. The Echo opening receives the Echo waves. The water level sensor Arduino measures the time between Echo and Trigger. This traveled distance is directly proportional to the time.

Researchers have developed the first standard LED covering the full visible light, in collaboration with Nichia Corporation. LED and OLED...