In this Instructable we will explain how infrared signals are used by a remote to control a toy or device, then show how a simple circuit can be added to an Arduino to operate the same device through free, Open Source software. 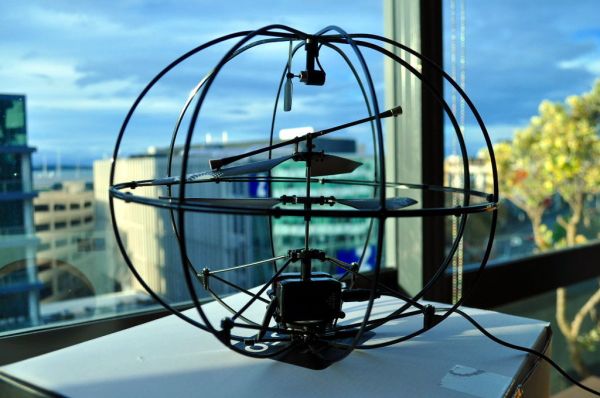 This document is part of a series covering the Puzzlebox Orbit, a brain-controlled helicopter that features an open design, open hardware, and open software. The helicopter can be operated via an EEG headset plus either a mobile device or the dedicated Puzzlebox Pyramid remote control unit. The Puzzlebox Pyramid includes a micro-controller based on the Arduino.

While we refer to the Puzzlebox Orbit in our examples, the principles, source code, and to a large extent software are all directly applicable to most any toy or devices which use infrared (IR) for remote control.

Here we explain in a very broad sense how an infrared remote control works.

There is at least 1 infrared LED (or Infrared Emitter, IR LED, IR Emitter) inside every infrared remote control, including the one you use to control your TV set. When you press a button on the remote, the IR LED will give out a certain series of “LOW”s and “HIGH”s which represents a series of “0”s and “1”s. (To be strict, it is common that a “HIGH” and a corresponding “LOW” consist of a “0”, and another combination of “HIGH” and “LOW” with different period represents a “1”.) Different series of “0”s and “1”s can mean different things, for example maybe “1100100000111” can mean “Turn Off the TV”, and “001101011100” can mean “Volume Down”.

Infrared is also cast by light and heat sources all around you: light bulbs, sunlight, heaters, even people. Therefore the remote control needs to have a distinct method of sending out infrared code to the receiving device (TV set, helicopter, car, etc.). That’s why infrared normally transmits with “carrier” – a high frequency square wave sequence (normally 36kHz, 38kHz and 40kHz). So, if you were to capture and zoom in on an infrared signal, you would find each “HIGH” consists of a sequence ofsquare waves rather than a continuous “HIGH” voltage level.

You might have a question: How can you learn the IR code used by a remote control?

One way is to use a Logic Analyzer.

A logic analyzer is an electronic instrument which displays signals in a digital circuit. (Digital circuits represent signals by discrete bands of analog levels, rather than by a continuous range. Basically if there’s only two different voltage level in a circuit, say 5V and 0V, then it’s a digital circuit. If the voltage in the circuit can be any voltage in between, then it is a analog circuit.)

Since we already know that an IR code is a digital signal rather than an analog signal, we can use a logic analyzer to capture and record the code emitted by the IR LED. First clip in to the Common(some times marked as GND, meaning “ground“) Cathode pin of the IR LED, and then clip a signal channel of the analyzer in to the Anode pin of the same IR LED. Then tell the Logic Analyzer to start recording the signal. If you don’t know which sampling rate to use, then use the highest option available.

It’s easy to identify IR LED’s polarity is simple even after they were soldered: There are two electrodes inside an IR LED, the bigger/longer one is Cathode, and the smaller one is Anode. See photo.

NOTE: It should be mentioned that if the logic analyzer fails to read an IR signal, but the controller is able to make the helicopter fly, it is possible that the test leads are clipped on the wrong way around, and that the ground and signal leads should be switched.

Step 3: Understanding how IR commands are represented by binary codes

Here we explain how the raw control signal was decoded such that an algorithm could be written to reproduce it.

Take a look at Picture 1. You can see the IR LED is sending out IR commands almost every 0.1 seconds.
Take a look at Picture 2, and pay attention to the timestamps and compare it to Picture 1. Load the A_H3RMFM.logicdata file (in the .zip file) with Saleae Logic software, move the signal data to 4s, zoom in, and you’ll see the exact same data as shown in the image. 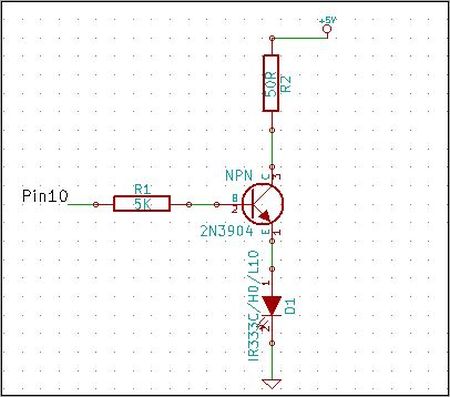 Let’s give the combination of one “HIGH” and one “LOW” a name, say a “bit“. Then the first two bits inPicture 2 is different from the rest with HIGH=0.768ms, LOW=0.477ms, so Iet’s put them aside, because it is very possible that these two bits are specially timed to denote the start of an IR command. (Actually if you look at other commands, they always lead by these two bits.)

Solder components (or use a breadboard) as shown in the schematic:

For more detail: Using an Arduino to Control an Infrared Helicopter