Hi guys, welcome to today’s tutorial. Smart farms are becoming very popular as everyone is beginning to see the benefits in terms of crop health and yield and I know a lot of people that will be interested in smart farm automation. That’s why today, we will be looking at how to use a soil moisture sensor with an Arduino to determine the moisture content in the soil. 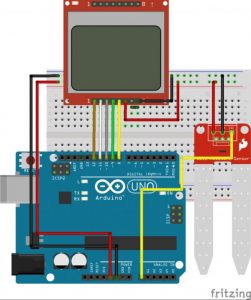 Soil moisture is generally the amount of water that is held in spaces between soil particles. It’s is a very important factor that determines the growth of crops and their health.

Some of the features of this sensor include:

The probe of the sensor shown below consists of two large exposed pads that are used to test the electrical conductivity of the soil.

Our goal for this tutorial is to demonstrate how to use this interesting sensor by measuring the soil humidity and displaying the value either on the Arduino Serial monitor or on the Nokia 5110 LCD.