Today’s post is something I’ve prepared for a long time. Hardware-wise it’s a simple thing – ATtiny45 emulating a PS/2 device, sending a keypress when three knocks are detected in the attached piezoelectric sensor (or piezo buzzer as they are also called). But if your computer can boot on PS/2 keyboard input and you have your computer stowed somewhere hard to reach (or just want to impress your friends), it’s a pretty neat little gadget! Here’s a video of it in action:

My PC takes a few seconds to put anything on display, but if you look at the bottom right corner, you can see the blue power LEDs light up immediately after the knocks.

Hardware-wise this hack is super simple. You’ll need less than $10 in parts and many probably already have these lying around:

The Schematic and Breadboard Setup

The PS/2 part as discussed in my minimal PS/2 keyboard post doesn’t require any other hardware than the ATtiny. The piezo element uses a 1 Mohm resistor like in the Arduino Knock Sensor tutorial, providing a path for voltage level to get back to zero over time. The LED is connected to PB4. 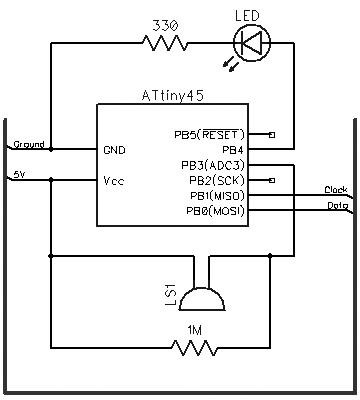 The PS/2 connector also provides power to the device. Instead of soldering a custom PS/2 connector for the project, I took a passive USB-PS/2 adapter I had lying around and used a multimeter to find out which USB pins correspond to the PS/2 ones. Not surprisingly, PS/2 GND and VCC are connected to USB GND and VCC. In my adapters, PS/2 clock was connected to D+ and data to D-. You can see the mnemonic printout I made on that one below, as well as one possible breadboard configuration.

For more detail: Turning PC On with a Knock Using ATtiny45 and a Piezoelectric Sensor